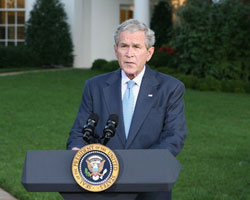 
Undoubtedly, President Bush has considered pardons to minimize his and his subordinates’ legal exposure upon leaving office. How far can he go? Brian Kalt, a Michigan State law professor and a historian of the presidential pardon, says that “as long as it’s for a criminal federal offense, there don’t seem to be any limits at all” to the pardon power. President Gerald Ford issued a preemptive blanket pardon to Richard Nixon in 1974, establishing a broad precedent that’s never been challenged.

Last fall, Democratic congressional staffers vigorously researched what options they have to head Bush off at the pass. There don’t appear to be many. Congress could try to curb the president in some way—for instance, forbidding pardons in the final days of his administration—but no one knows whether this would hold up in court. Pardon power could be limited with a constitutional amendment, but…that’s an impossibility.

Some scholars believe Bush could even pardon himself. (Nixon considered it.) A less dramatic, and equally effective, way to protect himself would be to pardon his immediate subordinates, making it difficult to use the threat of prosecution to force them to testify against him. (The precedent here was set by Bush père. In the final days of his term, he pardoned several Iran-Contra figures who might have implicated him in the scandal.) There’s also speculation that Bush might offer blanket immunity to anyone connected to the torture policy. However, anyone Bush pardons will no longer be at risk of self-incrimination—and therefore will not be able to plead the Fifth Amendment if ever called to testify.