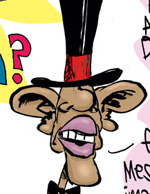 For the most part, America’s editorial cartoonists have gotten better at drawing Obama over the last year. They’re no longer depicting him as a generic black guy but as an unique individual with his own distinctive features. (I’m sure there’s a dissertation topic in there somewhere about how this somehow mirrored many white Americans’ evolving views of candidate Obama.) But there are some still some stragglers, whom I feel obligated to call out—in the name of improving the quality of political satire, of course. Not that good editorial cartoonists have to be good caricaturists: The Washington Post‘s Tom Toles, who is for my money the most original of the newsprint cartoonists, draws Obama like he has a bow tie stuck behind his head. But at least it kinda, sorta looks like him.

What bugs me are the cartoonists who still do the random-black-dude thing or use some kind of slapdash combo of Obama’s most prominent features (“Big ears? Check! Angular chin? Check! Longer than average torso? Check!”). Or worse. After the jump, a collection of nine of the most egregious examples of editorial cartoonists’ attempts to capture Obama’s likeness, and some thoughts on who—or what—they actually look like. 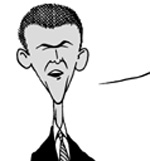 Our new alien overlord. (As drawn by Tony Auth.) 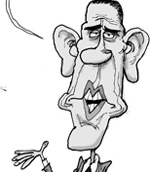 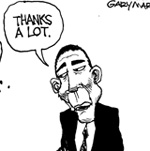 A barely reanimated Leonid Brezhnev. (As drawn by Gary Markstein.)

Tuvok, the black Vulcan. (As drawn by Marshall Ramsey.) 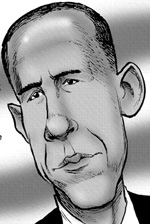 The late Peter Jennings. (As drawn by David Horsey.)

The zombie twin of Dr. Julius Hibbert. (As drawn by Ted Rall.)

A selection from Now That’s What I Call Borderline Offensive Clip Art, Volume 3 (As drawn by Gary McCoy.)

Mario Cuomo… walking like an Egyptian. (As drawn by the Vancouver Sun‘s Roy Peterson.)

A man with “Obama” embroidered on his jacket. (Wonsoo is from South Korea, but that’s really no excuse.)