2008 is dead and gone, and the universal opinion seems to be, from the economy to our government to music: “good riddance.” As Slant put it, “the cliché that oppressive Republican administrations foster the most compelling music was disproved over nearly each of the last 52 weeks.” Music seemed splintered and aimless, and year-end best-of lists seemed to reflect the confusion, with the same 50 records showing up a lot, but in completely different orders. Some of the year’s most successful and compelling music was actually made months, or even years, before the start of 2008. So, 2009, will you be any better? Here’s a quick (and admittedly somewhat fanciful) look ahead at the year ahead’s most anticipated releases.

January 6, 2009
Glasvegas finally release their acclaimed self-titled debut album in the US. A hung over nation ignores it completely. 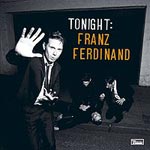 January 27, 2009
Scots Franz Ferdinand return with the weirdly-titled Tonight: Franz Ferdinand (left), which is supposed to be “inspired by the heavy dub sound of Jamaican reggae,” a claim exceeded in ridiculousness only by Coldplay‘s announcement of Viva La Vida‘s “Hispanic theme.” A still-hung over nation’s ignorance becomes towering.

February 3, 2009
Initial release date of 50 Cent‘s new album Before I Self Destruct moved to July.

March 3, 2009
U2‘s No Line on the Horizon turns out to actually be pretty good, although the 27 Grammys it eventually wins strike even supporters as excessive.

April 21, 2009
Depeche Mode (right) releases their twelfth studio album and embarks on a stadium tour, at which millions of goth-y teenagers have existential crises when they run into their parents wearing “Blasphemous Rumours” T-shirts.

May, 2009
Forced to come up with new ways to grab the attention of a public increasingly desensitized to her antics, Amy Winehouse makes headlines after the release of her new album Stronger by smoking crack from the skull of a baby seal while attempting to suicide bomb the Taj Mahal. Miraculously, she survives.

June, 2009
Eminem, jealous of Winehouse’s publicity, promotes his new album Relapse by making a YouTube video in which he rapes Kermit the Frog. Touched, Winehouse approaches Eminem about recording a duet; their cover of “Up Where We Belong” spends an unprecedented 16 weeks at #1.

July, 2009
The release date for 50 Cent‘s Before I Self Destruct is moved back to November.

August, 2009
After announcing in 2008 that she will be “operating independently of record labels,” Tori Amos releases a new album by promising to walk to purchasers’ houses and play it for them live. The tour comes to an abrupt end when she accidentally pushes her baby grand into a ditch outside Topeka.

September, 2009
Damon Albarn, desperate to return to his far-more-successful Gorillaz project, sabotages the Blur comeback album by convincing the band to record it using nothing but taut rubber bands. However, the album is an unexpected critical and commercial success, inspiring legions of new “Twang-core” followers. 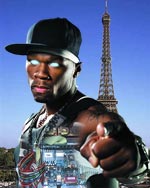 November, 2009
50 Cent‘s Before I Self Destruct is finally released, and the reason for the delays becomes apparent: in an attempt to jump ahead of the always-edgy Kanye West, Fiddy has spent the last 12 months having surgeons in Paris turn him into an actual French robot. Sadly, thousands are killed when no-one understands his announcement that he will literally self-destruct in “cinq minutes.”

Photos include some used under a Creative Commons license from Flickr users U2005 and Dakota Morrison.