San Francisco- and New York-based mostly-electronic music magazine XLR8R has just released its Best Albums of 2008 list, and while they wimped out and didn’t rank their 25 titles (come on, hippies!) their choices are so much better than the last magazine’s list I’ll give them a pass. Noted Party Ben faves Flying Lotus, Beach House, Portishead, M83 and Tobacco 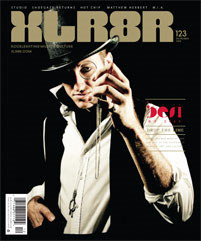 are in the mix, as well as intriguing choices from Atlas Sound, Daedelus, The Notwist and Spiritualized. Interestingly, they’ve rejected Lil Wayne (with hip-hop represented by Bun-B and Dizzee Rascal) as well as TV on the Radio (gasp, swoon). And of course there’s the requisite super-obscure ridiculousness from Syclops, whose MySpace page announces huffily, “We are sorry, we don’t do interviews or tour.” But you have an awesome MySpace page! The magazine’s inclusion of Yelle is a little iffy, since Pop Up came out in France in September, 2007 (remember me talking about Tecktonik last year?) but my own list archive has a few inaccuracies as well so, you know, glass houses.

Anyway, props to the ‘8R, and check out their full (and alphabetical—sigh) list after the jump.

Atlas Sound – Let the Blind Lead Those Who See But Cannon Feel
Beach House – Devotion
Brenda Ray – Walatta
Bun-B – Il Trill
Daedelus – Love to Make Music To
Dizzee Rascal – Maths + English
Flying Lotus – Los Angeles
Foals – Antidotes
Glass Candy – Beatbox
Jeremy Jay – A Place Where We Could Go
Kelley Polar – I Need to Hold on While the Sky is Falling
Lindstrøm – Where You Go I Go Too
Lone – Lemurian
M83 – Saturdays = Youth
MGMT – Oracular Spectacular
The Notwist – The Devil, You + Me
Portishead – Third
Syclops – I’ve Got My Eye on You
Spiritualized – Songs in A & E
The Mole – High as the Sky
Throw Me the Statue – Moonbeams
Tobacco – Fucked Up Friends
Xiu Xiu – Women as Lovers
Yelle – Pop-Up
Zomes – Zomes