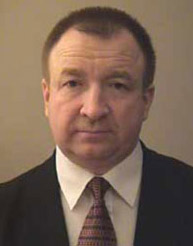 Over at the Washington Monthly, Steve Benen takes note of an increasingly popular scholar in Russia named Igor Panarin who has been predicting the demise of the United States for years. Apparently the Kremlin is a huge fan and is putting him on state television as regularly as possible. Here are some of this thoughts on the old U.S. of A.:

When asked when the U.S. economy would collapse, Panarin said: “It is already collapsing. Due to the financial crisis, three of the largest and oldest five banks on Wall Street have already ceased to exist, and two are barely surviving. Their losses are the biggest in history. Now what we will see is a change in the regulatory system on a global financial scale: America will no longer be the world’s financial regulator.”

…Asked why he expected the U.S. to break up into separate parts, he said: “A whole range of reasons. Firstly, the financial problems in the U.S. will get worse. Millions of citizens there have lost their savings. Prices and unemployment are on the rise. General Motors and Ford are on the verge of collapse, and this means that whole cities will be left without work. Governors are already insistently demanding money from the federal center. Dissatisfaction is growing, and at the moment it is only being held back by the elections and the hope that Obama can work miracles. But by spring, it will be clear that there are no miracles.”

None of that puts this Panarin character too far outside the current American mainstream. But his description of America’s denouement definitely does. It’s straight loony tunes:

“He predicted that the U.S. will break up into six parts — the Pacific coast, with its growing Chinese population; the South, with its Hispanics; Texas, where independence movements are on the rise; the Atlantic coast, with its distinct and separate mentality; five of the poorer central states with their large Native American populations; and the northern states, where the influence from Canada is strong.”

I don’t think the South (“with its Hispanics”) is going to rise again, to say nothing of the Native Americans in the “poorer central states” and the Canadian-sympathizers in the north. (That said, I always thought that “Minnesota Nice” business was awfully suspicious.) We Americans simply don’t consider secession and violence, both of which the Kremlin must deal with regularly in Georgia and Chechnya, as solutions to political problems. This country let the idiot son of a political dynasty steal the White House without rising up. Roughly 150 years before that, it fought an unbelievably bloody war to keep two parts of the country that didn’t particularly like one another under the same flag. We don’t do break ups.

But just in case Igor is right, I went ahead and chartered our borders. I look forward to someday living in Berkeley, capital of Liberalstan. 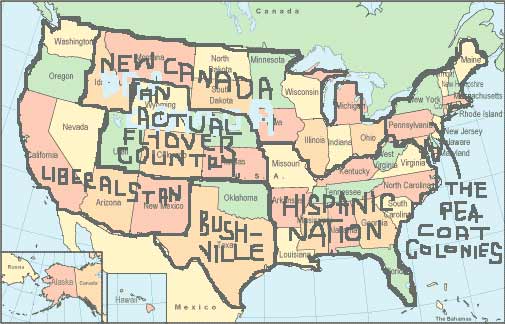