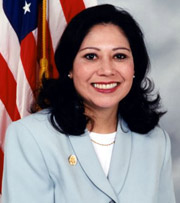 Quit yur bellyaching! Obama’s pick for Secretary of Labor is reportedly California Rep. Hilda Solis, the proud daughter of a union mom and union dad. In addition to a background as a management analyst at the Office of Management and Budget and a 100 percent rating from the AFL-CIO in 2007, Solis brings a reputation as one of Washington’s leading proponents of green jobs. Check out her commitment to working people, courtesy of Harold Meyerson:

In 1996, when she was a back-bencher (and the first Latina) in the California State Senate, Hilda Solis did something that no other political figure I known of had done before, or has done since: She took money out of her own political account to fund a social justice campaign. Under California law, the state minimum wage is set by the gubernatorially-appointed Industrial Welfare Commission, and California’s governors for the preceding 14 years, Republicans George Deukmejian and Pete Wilson, hadn’t exactly appointed members inclined to raise that wage. So Solis dipped into her own campaign treasury and came up with the money to fund the signature-gatherers to put a minimum wage hike initiative on the California ballot. The signature gatherers gathered the signatures, the measure was placed on the ballot, it passed handily in the next election, and California’s low-wage janitors and gardeners and fry and taco cooks, and millions like them, got a significant raise.

If you were to sketch an ideal Labor Secretary, you could hardly do much better. (Another example of how Obama has found diversity without sacrificing an ounce of expertise .)

Update: The Economist notes that with the Solis pick, the white-male quotient in Obama’s cabinet is under 50 percent.