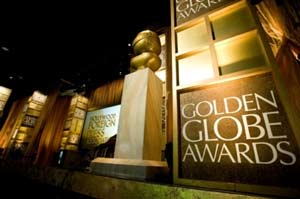 The always-good-for-a-laugh Hollywood Foreign Press Association put out their Golden Globe nominations today, and while elevating a few interesting choices, they overlooked a few things that make one scratch one’s head. First up, Milk had been scoring some critics’ awards, but apparently didn’t impress the HFPA, snagging only one nod for Sean Penn. His co-star, James Franco, got a nomination as well, but not for Milk–for Pineapple Express. You heard me. Other notable shutouts include WALL-E, coming off its recent LA film critics win for “best film” with only an animation nod, and The Dark Knight, making a last-minute promotional push for some awards, but also receiving only one, a posthumous nomination for Heath Ledger. Well, I hated that movie.

After the jump: more mockery, and what did Mick LaSalle think?

The actual nominees included plucky Slumdog Millionaire as well as almost-highbrow Frost/Nixon and baffling Benjamin Button for Best Picture – Drama, while the Musical or Comedy side included Mamma Mia!, Happy-Go-Lucky, and Burn After Reading. I don’t remember any of those. Was Mamma Mia! about Ace of Base or something? TV nods were even more dullsville: 30 Rock, The Office, Entourage, House, Mad Men. Fine, sure, whatever. I do like that Weeds, and people tell me Dexter is good, so a qualified “yay” for their nods. But when even the San Francisco Chronicle‘s notoriously easygoing Mick LaSalle calls your nomination list a “farce,” you know something’s up:

…five nominations for “Benjamin Button”? The movie is a fraud, a 165-minute ego trip for director David Fincher and a zombified Brad Pitt that takes one of F. Scott Fitzgerald’s weakest short stories and makes it even worse. Pitt plays a man who is born old and ages backward, and the whole point of the movie, the thing you sit around waiting two hours for, is for Pitt and co-star Cate Blanchett to meet at the same age (about 40), so they can have sex together without grossing each other out. …

And no best picture nomination for “Milk”? Come on. … Gus Van Sant’s exclusion from the directing category is the most glaring and unjust. “Milk” is an epic that will go down as one of the signature films of the year, and it contains at least two sterling performances – Penn’s, of course, and Josh Brolin’s as Dan White. Brolin was snubbed, as well, in the supporting actor category.

Hey, look at me, agreeing with Mick LaSalle. Anyway, if you’re interested, the awards will be given out at a ceremony on January 11, 2009.