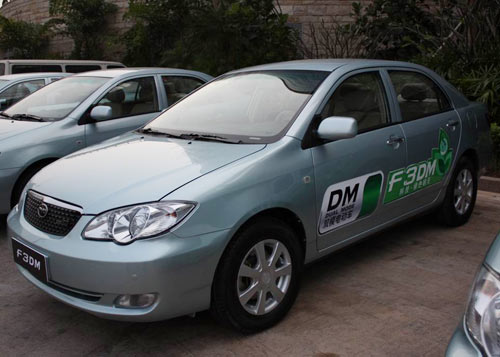 China’s first mass-produced hybrid electric car hit the market today. The car is made by BYD Auto and backed by Warren Buffett who owns 9.9 percent of the company. The F3DM (if you say so, C-3PO) can be charged from powerpoints at home or at electric car charging stations. That’s a first for mass produced. The hybrid runs 62 miles on a full battery and costs under $22,000 dollars.

BYD Auto says it doesn’t expect the F3DM will succeed with Chinese customers initially because of the high price, reports AFP. Instead the company is focusing on sales to company fleets. The strategy is to leapfrog past traditional cars—where Chinese technology lags badly—straight to hybrids.

Smart strategy. Remind me again why exactly we’re bailing out our own loser car companies? BYD already specialized in producing rechargeable batteries and only started making cars in 2003 when it bought a bankrupt state-owned car company. Since then it’s beaten Toyota and General Motors to the punch as those companies won’t launch home-chargeable hybrids cars before 2009 and 2010 respectively. Can’t we leapfrog past the traditional car companies straight to hyperdrive mass transit? Can’t we, as the Chinese say, transform the current mass chaos into mass opportunity?