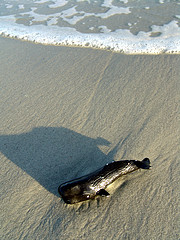 The Supreme Court ruled today that a lower court overstepped its authority last February when, citing severe harm to whales and other marine mammals, it imposed strict rules on the Navy’s use of sonar in the ocean off of Southern California.

The plaintiff in the case was the Natural Resources Defense Council, but it’s not just environmental advocacy groups that oppose sonar. In 2006, Mother Jones reported that the International Whaling Commission, the UN, and a number of scientists had all concluded that the widespread use of sonar likely causes organ lesions, brain hemorrhages, and severe decompression sickness, all leading to mass beachings and deaths.

Despite the primacy of these concerns in the NRDC’s filing, the court’s decision did not directly address the merits of the environmental group’s case. Chief Justice John Roberts did argue, however, that regardless of what harm the animals might suffer, the Navy’s interests would almost certainly outweigh the whales’.

“For the plaintiffs, the most serious possible injury would be harm to an unknown number of the marine mammals that they study and observe,” he wrote. “In contrast, forcing the Navy to deploy an inadequately trained antisubmarine force jeopardizes the safety of the fleet.”

Guess no one told him that destroying marine ecosystems will cause bigger problems for the Navy than an enemy submarine.

Photo used under a Creative Commons license from zen.