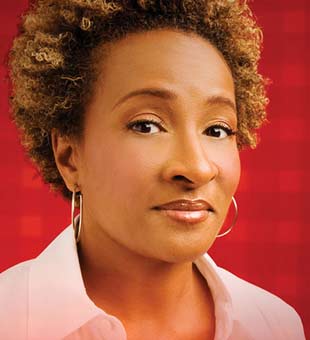 …or at least one celebrity, so far. Comedian and actress Wanda Sykes surprised an audience at a Las Vegas protest against on Saturday with the announcement that she’s gay. The event was one of many held around the country as part of a coordinated protest against Proposition 8 and other anti-gay measures. Sykes told the crowd that Prop 8 inspired her to be more outspoken:

“You know, I don’t really talk about my sexual orientation. I didn’t feel like I had to. I was just living my life, not necessarily in the closet, but I was living my life,” Sykes told a crowd at a gay rights rally in Las Vegas on Saturday. “Everybody that knows me personally they know I’m gay. But that’s the way people should be able to live their lives. Now, I gotta get in their face. I’m proud to be a woman. I’m proud to be a black woman, and I’m proud to be gay.”

The Emmy award-winning actress has roles on The New Adventures of Old Christine and Curb Your Enthusiasm. While Sykes hadn’t publicly discussed her sexuality before this, she has been a long-time supporter of gay rights causes, performing as part of this year’s Cyndi Lauper’s True Colors Tour which benefited the Human Rights Campaign. Her Wikipedia page says, “She is now officially a homosexual,” which makes me wonder if there’s some sort of certificate I’m supposed to get? A passport stamp or something? I’ve been practicing without a license!