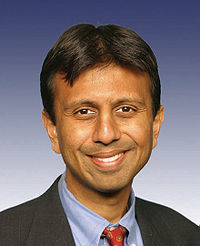 If you know anything about the Governor from Louisiana, you know he’s whip smart. Apparently, he also has some political instincts. Here’s why he refused to be vetted as part of John McCain’s VP search (from the WaPo via Andrew):

While the official reason that Jindal took his name out of contention was his lack of a desire to leave the Louisiana governorship, there was also real trepidation within his political inner circle that Jindal might wind up as the pick — McCain was attracted to his comprehensive health-care knowledge — and be caught up in what they believed to be a less-than-stellar campaign that could pin a loss on Jindal without much ability to change or control the direction of the contest.

Jindal, who is 37, was a congressman from 2004 until 2007, when he was elected governor. He was the secretary of the Louisiana Department of Health and Hospitals at 25 and president of the University of Louisiana system at 28. He turned down both Harvard Medical School and Yale Law School to pursue a Rhodes Scholarship after graduating from Brown.

Jindal has scheduled an upcoming appearance in Iowa, fueling speculation that he is considering a 2012 run for the presidency. (Jindal would be just 41.) The only question: Is Bobby Jindal too “elite” for the Republican Party?