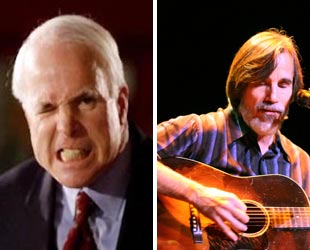 For those of you who felt like the McCain campaign, round about early September, started to look like some sort of demented cartoon, don’t say “that’s all folks” yet. As we discussed here back in August, singer-songwriter Jackson Browne filed suit against the McCain campaign for using his song, “Running on Empty,” in a campaign ad. Sure, the suit was more symbolic than anything (considering the ads were probably off the air by the time Browne called his lawyer) but the remnants of the McCain campaign are taking it very seriously, countersuing in U.S. District Court in California. As Reuters reported, McCain filed two motions:

The first is a standard motion to dismiss, claiming that McCain’s use of the song was fair use. McCain also says that Browne’s assertion that the Lanham Act’s prohibition on the implication of a “false association or endorsement” fails because it only applies to “commercial speech,” not “political speech.” The second filing is maybe even more interesting. It’s an anti-SLAPP motion, which is typically used by defendants as a way to seek monetary damages after a plaintiff has subjected a defendant to a lawsuit meant to chill free speech. So far, McCain is only looking for attorney’s fees and costs, but claiming an artist has interfered with free speech is quite the poke of an eye in show business.

That’s right, McCain is looking to recoup some cash here. To add insult to injury, the first motion included the boastful assertion that using “Running on Empty” in their ad “will likely increase the popularity of this 30-year-old song.” Hilarious, but McCain may have a point, as the only major “win” that had anything to do with his campaign was pop-cultural: SNL’s ratings bump and Tina Fey becoming America’s sweetheart. Maybe Browne should write a book?