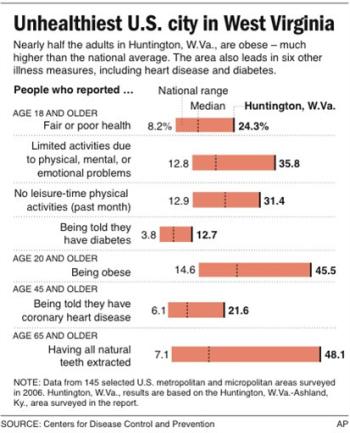 The CDC recently ranked Huntington, West Virginia as America’s unhealthiest city, leading the nation in rates of obesity, heart disease, diabetes—even the percentage of elderly people who have lost all their teeth.

On the other end of the scale was Burlington, Vermont, land of happy, healthy hikers and natural-food co-ops. Perhaps unsurprisingly, Burlington is a relatively wealthy area, where fewer than 10 percent of people live below the poverty line. In Huntington, the number rises to nearly 20 percent.

In interviews with the Associated Press, a number of Huntington residents said they didn’t have the time, the resources, or the inclination to prioritize personal health. Looked at that way, the equation seems simple: people in Burlington have the luxury to shop at boutique health food stores; people in Huntington don’t.

But Keri Kennedy, a state health officer, says the bigger problem is one of perception.

She had just seen a commercial that presented “The KFC $10 Challenge.” The fried-chicken chain placed a family in a grocery store and challenged them to put together a dinner for $10 or less that was comparable to KFC’s seven-piece, $9.99 value meal.

“This is what we’re up against,” said Kennedy, noting it’s an extremely persuasive ad for a low-income family that is accustomed to fried foods. “I don’t know what you do to counter that.”

KFC isn’t the only fast food chain to capitalize on the belief that low-income people can’t afford to eat better. But while there is a correlation between poverty and poor health, there doesn’t have to be. Studies have shown that, given the opportunity and encouragement, low-income families will purchase and eat fruits and vegetables. And the rise of community gardens and farmers’ markets, even in rural and low-income areas, suggests that a taste for fresh food crosses class lines. Given the right information—in a sense, permission to eat well—the citizens of Huntington could be thriving like their neighbors to the north, on their own terms.