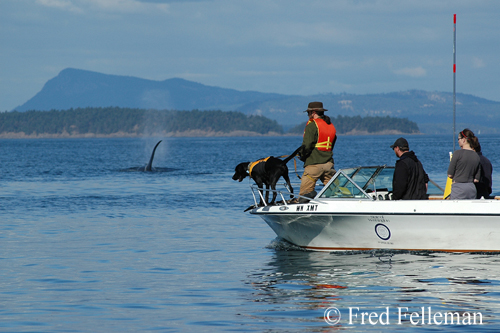 It’s been a bad year for the southern resident population of orcas in Puget Sound. Seven have gone missing and are presumed dead. Including the nearly 100-year-old matriarch of K Pod, along with two reproductive-age females vital to the future of the whales. One female, L-67 showed clear signs of emaciation before she disappeared in September. That leaves only 83 animals in this culturally-unique population of orca.

It’s been a bad year for salmon too—the primary prey of southern resident orca. Researchers suspect the missing whales may have starved. Now researchers at the U of Washington Center for Conservation Biology are trying to answer that question using a specially trained dog. The Seattle Times reports how Tucker, a black Lab, has been deployed two of the past three summers to track orca scat from the bow of a research boat.

Analysis of hormone levels in the scat suggest mortality among the orca was highest when their thyroid hormone levels were lowest. This means they’re malnourished. Katherine Ayres, a UW graduate student working on the study says: “It is interesting and sad. We have a link to what scientists have been saying for a long time.”

The orcas’ favorite food, Puget Sound chinook salmon, were listed as a threatened species nearly 10 years ago. In recent years the whales have been ranging as far south as Monterey looking for California salmon. But it’s been a brutal year for California’s fish too. A report out today by California Trout forecasts that 65% of native salmon, steelhead, and trout species will be extinct within 100 years.

No salmon, no orca. Work hard, Tucker the black Lab. Maybe Malia and Sasha could adopt you from afar and shed light on the plight of these whales in the wildlife-deprived halls of Washington DC—where their future will be decided one way or another.