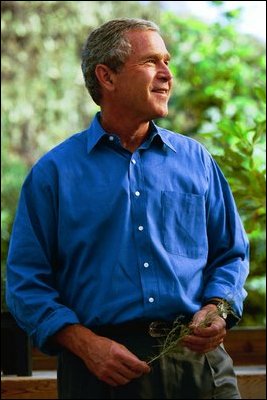 Lest the energy of this momentous election make you forget about the sitting President’s catastrophic reign of error, the Washington Post reports that the White House is pushing through new federal regulations that would relax current rules on everything from mining to drinking water to greenhouse gas pollutants.

Bush is rushing to make certain his legacy as a pro-industry deregulator goes down in history. These rules will be difficult for the next administration to reverse, and Bush knows all too well the cost of waiting. The very afternoon of his January 20, 2001 inauguration, Bush issued a memo that halted the implementation of incomplete federal regulations from Clinton’s waning days. To avoid repeating this, the White House has determined that all “significant” rules must be completed by Nov. 20, early enough for the rules to take legal effect before Bush steps down.

White House employees and watchdog groups alike agree that these new rules, roughly 90 in all, will have long-lasting effects. One recent rule would allow natural gas pipelines to operate at a higher pressure, increasing the risk of rupture. Another due out soon would ease requirements for environmental impact assessments for ocean fishing. A third would rewrite the process for cleaning up oil spills, while yet another would relax pollution standards on power plants, leading to the emission of millions of tons of additional CO2. The list goes on.

And who’s writing these new rules? The citizenry? The public?

The burst of activity has made this a busy period for lobbyists who fear that industry views will hold less sway after the elections. The doors at the New Executive Office Building have been whirling with corporate officials and advisers pleading for relief or, in many cases, for hastened decision making.

According to the Office of Management and Budget’s regulatory calendar, the commercial scallop-fishing industry came in two weeks ago to urge that proposed catch limits be eased, nearly bumping into National Mining Association officials making the case for easing rules meant to keep coal slurry waste out of Appalachian streams. A few days earlier, lawyers for kidney dialysis and biotechnology companies registered their complaints at the OMB about new Medicare reimbursement rules. Lobbyists for customs brokers complained about proposed counterterrorism rules that require the advance reporting of shipping data.