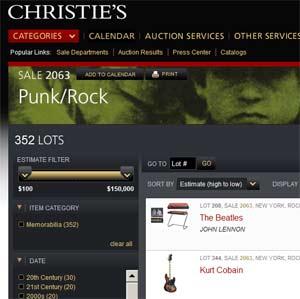 As the Sex Pistols once snarled, if you don’t know what you want but you know how to get it, then you’ll want to head to an upcoming sale in New York to be held by venerable auction house Christie’s featuring tons of rock and punk stuff. From the AP:

The event, announced Tuesday, includes more than 120 records, photos and promotional pieces for such punk, garage rock and new wave legends as the Velvet Underground, Patti Smith, the Ramones, David Bowie, Blondie, the Cure and the Smiths. The auction is Christie’s first to focus on punk mementos, signaling the collectible status of a brash, anti-authoritarian rock movement that largely thumbed its nose at posterity. “We understand that tastes change, tastes mature,” said Christie’s pop-culture chief Simeon Lipman. “Ten years ago, punk memorabilia probably wouldn’t be something we’d be auctioning here. But now, people of a certain age have a certain ability to splurge on this material.”

A certain age? Are you saying I’m old? Well, whatever my age, my ability to afford any of this stuff is very uncertain: a signed Ramones test pressing is estimated at $5,000-$7,000, and a Sears bass guitar used by Kurt Cobain on early demos is estimated to fetch up to $80,000. For those of us living a more, er, punk rock lifestyle, $200 might get you a set of Sex Pistols buttons. That’s right: buttons. Jeez, why haven’t I been saving those?!

It’s not really “punk,” per se, but if anybody wants a hint for an early Christmas gift for your dopily-named DJ and blogger, this New Order poster would look great on my wall. Thanks in advance.