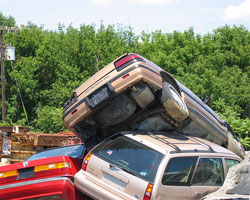 During his long career, John McCain has battled Detroit and dressed down automakers to demand tougher mileage standards and safer cars. But he apparently has a soft spot for used car dealers. The lovefest started years ago, but was on full display during McCain’s stints as chairman of the powerful Senate Commerce Committee in the late 1990s and early 2000s. Back in 1997, McCain cosponsored legislation that would help used car dealers sell rebuilt wrecked cars to consumers, at inflated prices, and without disclosing the damage. The bill, which had the potential to keep millions of dangerous cars on the nation’s highways, was a pet project of then-Senate Majority Leader Trent Lott (R-Miss.).

In June 1997, Lott introduced the “National Salvage Motor Vehicle Consumer Protection Bill,” which, despite the title, actually would have undermined consumer protection laws nationwide. Most states require damaged or totaled cars, like those flooded during Hurricane Katrina, to be tagged with what’s known as a “salvage title” before they can be resold, so potential buyers will know those cars may have major problems. Not surprisingly, car dealers would rather keep this information under wraps. In one of the most common types of auto fraud, unscrupulous dealers will take damaged cars to a state with weak consumer protection laws and get new, non-salvage titles that allow them to disguise the fact that the car may be held together with gum and bailing wire.

Many states have been working to end this practice and have created stiff penalties for this sort of title fraud. They also allow consumers to sue dealers to recoup their money if they have been defrauded. But Lott’s bill would have done away with those tough state laws by instituting a single weak federal statute governing salvage titles. That new law would have prevented consumers from suing car dealers to get back their money if they’d unwittingly bought a rebuilt wreck. The Lott bill also exempted most used cars from any disclosure requirements. States that wanted to continue to enforce their own stricter laws would have no choice but to give up federal funds that allowed them to participate in a national fraud-prevention database that helped track wrecked cars across state lines.

Thirty-eight state attorneys general, including Arizona’s, wrote to McCain and other senators on the committee to oppose the bill, which Iowa attorney general Thomas Miller called a “wolf in sheep’s clothing.” The bill was a sop to sleazy used car dealers, but also to insurance companies, which profit from the sale of wrecked vehicles and were major financial backers of Lott’s many Senate campaigns.

William Brauch, the director of the consumer protection division of the Iowa attorney general’s office, testified against the bill before McCain’s committee in September 1997, emphasizing its impact on state consumer protection laws. “Our message to Congress was ‘butt out,'” says Brauch. Car titling, the issue at the heart of the bill, has always been a state function. During the hearing, Brauch recalls, McCain disputed his contention that the bill would preempt state law. But Sen. Slade Gorton (R-Wash.) set him straight, and McCain was forced to concede that the bill would indeed bigfoot the states.

Nonetheless, McCain shepherded the legislation through his committee and onto the Senate floor. Both the Republican-controlled Senate and House passed the bill. It looked like all but a done deal. Republicans attached the measure to an omnibus spending bill with the assumption that President Clinton would have no choice but to sign it. But in a minor bit of legislative drama, consumer activists and the state AGs succeeded in lobbying Clinton, who threatened to veto the spending bill unless the measure was taken out. It was removed.

Lott tried again in 1999, introducing a virtually identical bill, which McCain again cosponsored. This time, though, Democrats, through Sen. Dianne Feinstein (D-Calif.), offered a competing bill that would have made the federal law the floor, not the ceiling, for consumer protection. It would have allowed states to continue to enforce tougher laws if they wanted to, while raising the standards for other states whose laws were seen as too weak. The bill was modeled on legislation that had successfully cracked down on car dealers who rolled back odometers.

Despite pleas from consumer activists, McCain kept the Feinstein bill bottled up in committee, and he moved Lott’s bill to the Senate floor. Rosemary Shahan, the head of California-based Consumers for Auto Reliability and Safety, wrote McCain urging him to support the Feinstein bill. When she got no response, she contacted reporters at the Arizona Republic, which in September 1999 ran a front-page story critical of McCain for supporting an anti-consumer bill.

Shahan says McCain was apparently unhappy with the story. In February 2000, when McCain came to Sacramento for a town hall meeting, Shahan was there distributing information about the bill to the audience and assembled reporters. She also got in line to ask a question. “They stopped taking questions when they got to me,” she says. So afterward Shahan approached McCain and asked him if he’d consider dropping his sponsorship of the Lott bill and cosponsor Feinstein’s. “He would never look me in the eye,” she says. McCain, she says, was clearly very angry and eventually dismissed her by saying, “You made your point.” Then he walked off. “He knew it was a bad bill,” says Shahan.

The Lott bill eventually died, but the episode stands out for several reasons. For much of his tenure as commerce committee chair, McCain had forged a good relationship with auto safety and consumer groups. Joan Claybrook, the president of Public Citizen, the consumer group founded by Ralph Nader, has been a fan. In 2001, Public Citizen gave McCain an award for his leadership and commitment to consumer rights. Advocates for Highway and Auto Safety also touts an endorsement from McCain on its website.

The rebuilt-wreck issue forced McCain to choose between consumers and a stalwart Republican constituency. Car dealers have long had a close relationship with the Republican Party. Republican presidents have gone so far as to give a few car dealers and their wives ambassadorships. The current ambassador to the UK, Robert Tuttle, owns one of California’s biggest car dealerships. The American ambassador to Barbados is married to the owner of a major DC-area auto dealership. Just this year, car dealers have showered McCain with more than $700,000 in campaign contributions, more than four times what they gave Barack Obama.

But campaign money does not sufficiently explain McCain’s stance. One reason consumer advocates have liked him is that he has publicly hammered auto industry officials, who were among his largest contributors, for refusing to get on board with new auto safety standards. “He was as tough as any member of Congress has been” on auto issues, says Sally Greenberg, executive director of the National Consumers League. But the rebuilt-wreck bill was a pet cause of Lott’s, the Senate majority leader, and consumer advocates figured that McCain’s party loyalty trumped consumer protection in this case. It was an episode in which he was neither a maverick nor a reformer.

Photo by flickr user The Consumerist used under a
Creative Commons license.