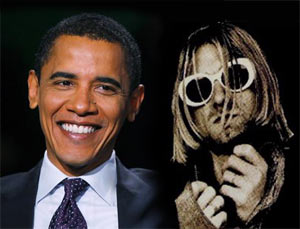 I know, I know: don’t jinx it. But seriously, have you seen the latest polls? With a 14-point lead, I think a little creative visualization is allowed. So, a Democratic president takes over from an unpopular Bush-led administration after an Iraq war doesn’t quite turn out as hoped, as the economy goes spiraling into the pooper. Sound familiar? An eerily similar set of circumstances was at play 16 years ago, and at the same time, an edgy, independent new genre of punk-inflected rock came to dominate American culture and redefine the notion of “alternative” music. Grunge was both idiosyncratically local and an inevitable product of its time, an expression of anguish and frustration at the world: the failing economy, monolithic pop culture, an out-of-touch government. Granted, Nirvana’s Nevermind hit #1 on the Billboard album charts in January, 1992, just as candidate Bill Clinton was fighting off the now-almost-quaint-seeming Gennifer Flowers scandal, and clearly, the Northwest grunge scene had been bubbling under for a few years before that. But right now, rock, as such, seems primed for a revival: charts are dominated by hip-hop and American Idol winners, and the underground is all electro, all the time. Could a generation of kids be about to lose their jobs and pick up guitars?

A little bit of googling turned up this half-hilarious, half-fascinating 1993 New York Times article by music critic Jon Pareles, in which he optimistically predicts that the upcoming Clinton administration’s emphasis on “tolerance” could reduce “the misogyny that mars hard-rock and hip-hop” as well as “lessen homophobia.” Boy, were we all this googly-eyed with hope back in ’93? But Pareles does take an interesting look back at how Democratic presidents coincide with changes in musical culture:

Democratic Administrations presided over one of rock’s most fertile periods, from 1961-68, and one of its most contradictory ones, 1977-80, during Jimmy Carter’s Presidency. In the 60’s, under Kennedy and Johnson, an expanding economy and the friction over civil rights and Vietnam convinced rockers that they represented a vanguard community, that they could experiment yet stay popular. The Carter years were another story, with domesticity in the foreground and economic turbulence lurking. A recession bred the comfortable, introspective corporate pop of groups like the Eagles or Fleetwood Mac (who provided the Clinton campaign’s theme song), the boom and bust of disco, and the radical mutations of punk-rock and hip-hop, which were influential but commercially marginal.

…The growth areas of late-80’s and early-90’s popular music offered mechanical dance-beat escapism and tidings of anger and death. Rock grew even more contrary… Instead of the implicit optimism of protest songs, apocalyptic thrash bands and rappers offered a chance to vent.

Of course, many would argue that as the ’90s progressed and the Dow rocketed to new heights, grunge’s anguished cries quickly turned to narcissistic pablum and copycat sellouts: Nirvana begat, er, Bush. For music’s sake, maybe we should hope Obama doesn’t turn the economy around. Sure, we’ll all go hungry, but the the rock music the kids put out will feed our souls for another generation.