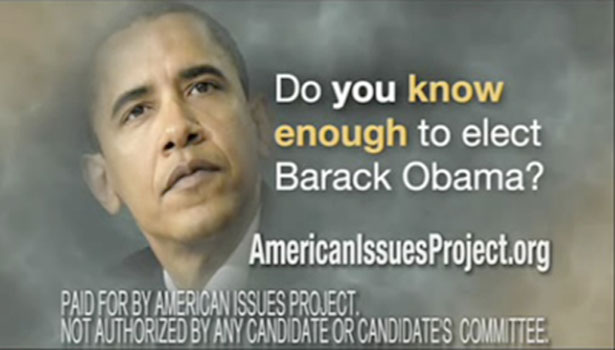 By this time in the 2004 election, John Kerry was already drowning in attack ads hurled at him from the Swift Boat Veterans for Truth. But this year, outside groups funded by millionaires or billionaires have been relatively dormant—thus far. As Election Day approaches such outfits are gearing up, and they appear to be biding their time until the final days of the campaign, when they can inflict the most damage. One of those groups is American Issues Project (AIP), which has been funded almost entirely by a single Texas billionaire and involves many of the leading players from the Swift Boat campaign. In August, it aired an ad attempting to highlight ties between Barack Obama and William Ayers, the 1960s radical who participated in at least several domestic bombings. The ad didn’t land with Swift Boat-like power, but it signaled the opening salvo of what could be a nasty conclusion to this year’s campaign.

The man behind AIP, Tony Feather, could become one of the most significant players in the election. Feather, a longtime Republican operative, is not a household name and he rarely talks to the media. But his specialty—mounting stealth political advocacy campaigns—has played an outsized role in the last two presidential elections. Should Obama end up confronting a Swift Boat-style fusillade in the closing weeks of this campaign, the odds are that Feather will be one of the ops responsible for the onslaught.

A former executive director of the Missouri Republican Party, Feather is known for his fierce campaign tactics on behalf of candidates like John Ashcroft and former Missouri Attorney General Bill Webster. Feather ran Webster’s 1992 campaign for governor; Webster not only lost but went to prison on charges related to misusing his office for campaign purposes. Feather is also a compatriot of Karl Rove, whom he first met in 1974. The two are close enough that Rove at one point endorsed Feather’s consulting firm on its website.

Politics has also made Feather a rich man. He started a handful of companies that specialize in “microtargeting” voters with direct mail, phone, and grassroots lobbying for GOP campaigns and big corporate clients. One of his companies sets up fake grassroots groups to give the appearance of public support for corporate legislative efforts. In 1999, Feather founded Feather Larson Synhorst with another GOP operative, Tom Synhorst, who is sometimes referred to as the “Johnny Appleseed of Astroturf.”

FLS is responsible for many of those annoying robo-calls to voters that arrive during the days leading up to elections. The firm and its related entities, including the lobbying shop DCI Group, were among the biggest recipients of Republican National Committee money in 2004 election cycle and raked in nearly $27 million from Republican Party entities and candidates, including Bush’s reelection campaign.

Another one of Feather’s companies, FLS-Connect, has a virtual monopoly on campaign phone work for the GOP, having worked for the state Republican parties in all 50 states, according to the company’s website. In the past year, the RNC has paid FLS-Connect more than $9 million for its services. Since 2007, Feather’s firms have earned more than $16 million from Republican Party entities, candidates, or affiliated interest groups like the National Rifle Association, according to CQ Moneyline. In June McCain Victory 2008, a PAC run by the RNC and a handful of state Republican committees, paid FLS-Connect $4,000 to provide “telemarketing” services.

Feather was the political director of the Bush/Cheney 2000 campaign, and was central to Republican efforts to get around new campaign finance laws banning soft money donations to the national parties. In 2001, Feather founded Progress for America, a nonprofit group that served as the de facto political arm of the Bush White House on everything from Social Security privatization to judicial nominees. In 2003, Feather stepped down from the group to work for the Bush campaign, but PFA lived on, spinning off a 527 group, the PFA Voter Fund, to spend unregulated money directly influence the 2004 election.

In the five months leading up to the 2004 election, PFA-VF raised $45 million, ostensibly to compete with liberal 527 groups that rose up in the wake of campaign finance legislation banning soft money contributions to political parties. Seventy percent of the group’s money came from just 13 donors, including Dawn Arnall, the chairman of Ameriquest, the now defunct predatory mortgage lender. During the 2004 campaign, PFA-VF spent its millions on TV ads in most battleground states supporting President Bush or bashing John Kerry.

PFA-VA employed some of the best creative talent in the campaign business, including Larry McCarthy, who produced the famous Willie Horton ad in 1988. Its ads mirrored the themes of the Bush campaign. One ad featured Kerry windsurfing (the flip-flopping ad). Most notable, though, wasn’t an attack ad but one devastatingly effective clip known as “Ashley’s Story,” a dewy tear-jerker featuring Bush hugging the daughter of a 9/11 victim.

Federal law bars 527-groups from coordinating election activities with political campaigns, but PFA had several documented close ties to the Bush campaign. For example, Benjamin Ginsburg, the outside counsel for Bush/Cheney 2004, was also chief legal counsel to PFA. In February 2007, the Federal Elections Commission levied its third-largest civil penalty ever against PFA-VF for violating federal campaign finance laws. The group agreed to pay $750,000 for failing to register as a political committee, raising money from prohibited sources and in amounts above legal limits.

After the 2004 election, PFA continued to push the Bush agenda, getting involved in fights over judicial nominations and in the battle to replace Chief Justice William Rehnquist on the Supreme Court. The group also ran a series of controversial national ads linking the war in Iraq to the attacks of September 11. But the group has since gone dormant and its website has disappeared.

Last year, Feather went to work as a political advisor to Mitt Romney’s presidential campaign, which didn’t get far. But his American Issues Project has raised millions of dollars, mostly from a single donor, Dallas businessman Harold Simmons, a pioneer in leveraged buyouts who also invested serious cash in the Swift Boat campaign, according to the Washington Post.

AIP is staffed by people who have demonstrated their ability to drop a big bomb during elections. Among them is Chris LaCivita, a decorated former Marine who was a media consultant to the Swift Boat campaign in 2004. Several other Swift Boat campaign veterans are working with AIP as well. By law, the group is supposed to be operating separately from the McCain campaign, but given Feather’s intimate ties with the GOP, it’s hard to see where one ends and the other begins. The connections are deep. One of AIP’s board members, Edward Failor Jr., was a paid consultant to the McCain campaign. (A call to AIP’s spokesman went unreturned.)

McCain needs the billionaires and their nonprofit advocacy groups. Obama has raised more money, and business groups that played such a critical role in the election of George W. Bush seem reluctant this go-around to pour money into ads that would benefit McCain. Indeed, most of the independent expenditures during this campaign have come from groups supporting Obama, according to Congressional Quarterly. But as the Swift Boat campaign showed, a relatively small amount of money well-spent can go a long way towards changing the direction of an election. This year, that may prove truer than ever, as the rules of the game have changed significantly since 2004.

When Congress passed John McCain’s signature campaign finance reform bill in 2002, attempting to limit the influence of money in politics, the bill included a provision that banned electioneering ads by corporate entities, unions, or nonprofit groups 60 days before a general election. That’s why the Swift Boat ads appeared just before that 60-day limit kicked in, and not closer to the election. But last summer, in FEC v. Wisconsin Right to Life, the US Supreme Court found the ban on such advertising unconstitutional, freeing groups like the American Issues Project to wait until the very end of the campaign to pound a candidate with negative advertising when he has little time to fight back. The justices who signed on to the majority opinion were John Roberts and Samuel Alito, justices McCain not only voted to appoint but also said he would use as a model for his own Supreme Court appointments. Clearly he owes them. Their decision to invalidate McCain’s own campaign finance law has made it easier for his allies to play dirty to get him elected.