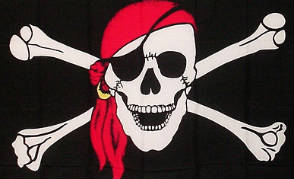 According to a new report from the Kuala Lumpur-based International Maritime Bureau, which tracks piracy on the high seas, instances of piracy this year are on par with the last—199 worldwide between January and September 2008 versus 198 during the same period last year. But bucking the trend are the waters off the coast of Somalia, where attacks have grown 75 percent, numbering 63 since last January, almost a third of the world total.

IMB Director Pottengal Mukandan characterized Somalia’s piracy epidemic as “unprecedented” and said “it is clear that pirates in the Gulf of Aden believe that they can operate with impunity in attacking vessels.” Indeed, men in speedboats armed with AK-47s and RPGs have raked in some $30 million ransom so far this year, seizing over 30 merchant ships, including the MV Faina, a Ukrainian vessel carrying 33 T-72 battle tanks, allegedly bound for the government of South Sudan.

This week NATO dispatched two destroyers and five frigates to the area. They will join U.S. and French vessels already there. Russia has reportedly also sent at least one warship. The rules of engagement are yet to be worked out, but military commanders have already acknowledged the difficulty in fighting piracy, as attackers are virtually indistinguishable from commercial fisherman until they pull out their weapons and mount an attack. Besides that, the sheer number of ships transiting the Gulf of Aden—20,000 each year—makes it virtually impossible to protect them all.

Think piracy in a far-off part of the world won’t affect you? Wrong… especially if you live in Europe. The International Chamber of Shipping has reported that two shipping firms have granted permission for their captains to navigate around the Cape of Good Hope in southern Africa, thereby avoiding pirate-infested waters off Somalia, but tacking on up to three weeks to delivery times. Other shipping companies are expected to follow suit. The result? Santa may not be able to deliver this year. According to an ICS spokesman, “Car carriers with vehicles for the UK, foodstuffs from Asia, textiles and clothing, dare I say it in time for Christmas market, will not be arriving on time if they have to [go round South Africa]. We could begin to see shortages within the next few weeks.”

Photo used under a Creative Commons license from Caleb’s Mom 02.