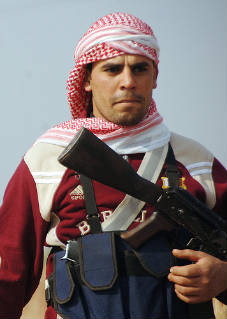 According to a Pentagon report delivered to members of Congress yesterday, violence in Iraq is down 77 percent from this time last year. The reasons are varied and complex. There’s the much-lauded “surge,” of course. There’s Moqtada al-Sadr’s decision to call a ceasefire. There’s the natural combat fatigue that follows years of intense violence. And, perhaps most importantly, there’s the decision by local Sunni tribesman to stop killing Americans and start killing Islamic extremists. Thanks to their change of heart (however temporary and politically calculated it may be) violence in Anbar has waned and for the first time in years its villages are secure and its roads passable.

All of this is great news. But forgive me for expressing some trepidation at this morning’s reports that the U.S. military, as part of its plan to disengage from Iraq, has agreed to transfer control of the Sunni militias to the Shiite-dominated government of Nouri al-Malaki. Until now, Sunni tribesmen have received stipends… a little extra encouragement, if you will… from the U.S. government. But beginning October 31, the 54,000 Sunni militiamen in the Baghdad area will be on Baghdad’s payroll to the tune of $15 million a month.

The idea of Sunnis being integrated into Iraq’s national security forces is a good one. The U.S. government is behind it, pressing al-Malaki to move even faster to bring Sunnis into the formal security structure rather than leaving them to their own tribal organizations, tenuously aligned for the moment with U.S. forces. But the proof will be in the pudding. Given the ethnic tensions that tore the country apart in recent years, fueling an orgy of killing and ethnic cleansing, integration will not be easy. Let’s hope that it works, though, for the alternative—particularly after the Americans depart Iraq—is to leave the Sunnis estranged from the Shiite power center in Baghdad, embittered by years of war, and armed to the teeth thanks in large part to Uncle Sam.