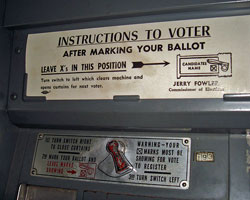 Groups across the country are taking steps to prevent vote problems from marring the vote next Tuesday. Every year, both sides of the aisle let fly with allegations of voter fraud, voting machine problems, and improperly purged voters. Because of technological developments, voters seeking to publicize problems and groups seeking to address them can do so quicker than ever before.

Crying foul in elections is an American tradition. Instances from recent presidential elections are obvious — belief that Katherine Harris stole Florida in 2000 and Diebold stole Ohio in 2004 persist to this day — but allegations of malfeasance can be found in gubernatorial, Senate, and other downticket races. This election season, like any other, has seen its share of vote-based accusations. The Democratic Party has a younger and poorer base than the GOP, meaning that vote suppression tactics that target transitory or low information voters often succeed as a partisan tactic. In Michigan, the state GOP has been accused of seeking to use foreclosure lists to purge newly homeless voters from the rolls. In Virginia, a phony flier instructed voters that due to heavy turnout Republicans would vote on Tuesday and Democrats would vote on Wednesday. In Florida, voters were informed by an unknown caller that they could vote by phone. In multiple states, college students are being told they cannot vote in the state of their academic institution if their parents claim them as dependents somewhere else. And of course the community organization ACORN may be, in John McCain’s words, “on the verge of maybe perpetrating one of the greatest frauds in voter history,” due to its imperfect but wildly successful voter registration drives.

The good news is, voters can use technology to protect the vote. Unlike in any prior election, everyday citizens have the opportunity to report and research problems via hotline, Twitter, blogs, and wikis.

The most conventional way voters can report a problem is through a voter hotline, of which there are several. Several television networks host hotlines because they give the networks an early look at voting irregularities that may become major stories. CNN, for example, is operating 1-877-GOCNN-08, which offers to patch a caller through to his or her local voter registrar if necessary.

The voting rights coalition Election Protection is hosting 1-866-OUR-VOTE. The coalition, which bills itself as the “largest voter protection and education effort in the nation’s history,” has call centers in Washington DC and around the nation. Staff receiving calls forward legitimate problems to “tens of thousands” of volunteers on the ground nationwide, most of whom are lawyers, law students, or otherwise legally trained. Those volunteers have been instructed to build relationships with local election officials, which they can use to address voting problems before they have the opportunity to swing a local, state, or federal election. Almost 20,000 reports from concerned citizens have already been posted to Election Protection’s online database. Major issues are blogged daily. Election Protection anticipates hundreds of thousands of calls leading up to and on Election Day. (Like Google, Election Protection also provides information on early voting, voter ID laws, and voting locations, customized to your location.)

More technologically savvy voters can report problems via Twitter or wiki. Twitter Vote Report allows users to send a text message to 66937 (MOZES) beginning with #votereport or to call 567-258-VOTE to submit a report by touchtone keypad. Election Protection also has Twitter capability. An election protection wiki hosted by the Center for Media and Democracy allows users to look up vote purgings and other challenges to voting rights on a state-by-state basis. VotersUnite.org offers a sortable election problem log. A voter suppression wiki investigates incidents of disenfranchisement and permits users to add comments.

Reports are already flowing in. CNN claims it has received 10,000 calls since mid-October. Election Protection says its hotline has received more than 50,000 since August. But it can be difficult to assess the reports that come in. In one typical instance, Mother Jones followed up with a voter complaint — made on our interactive map that allows users to share voting stories, problems, and solutions — that alleged newly registered absentee voters in Manhattan would not receive their ballots in time for election day. Multiple officials in the Manhattan board of elections assured Mother Jones that they had worked around the clock to make sure every newly registered voter would have the ability to exercise their rights before or on Election Day.

Despite the efforts of voting rights group to shine more light on voting nationwide, America will almost certainly be faced with a thicket of voter fraud and voter intimidation accusations after November 4, with no clear picture of which are realistic and which are overblown. The only way this election will not resemble 2000 and 2004, when Election Day was followed by months of howling, fair and exaggerated, about vote fraud, is for one candidate to win an electoral college victory so decisive that instances of fraud are dwarfed by a seemingly nationwide consensus by American voters.

Technology has made voter education easier and vote oversight stronger, but the only foolproof strategy to avoid vulnerabilities in the vote is to win big. If that’s the case, complaints can be examined to improve the quality of future elections, but needn’t be fought over to determine “who really won.”