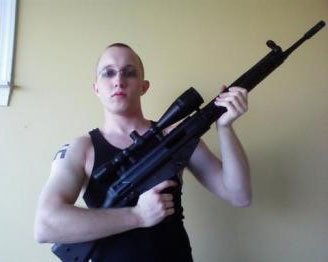 The prospect of an African American president is bringing the nation’s white supremacists out of the shadows—and, along with them, some subtler versions of racialist populism. Both hearken back to another economically and socially turbulent time in the United States, in the early 1980s.

Daniel Cowart (above) and Paul Schlesselman, the two neo-Nazis arrested for plotting to kill 102 African American high school students and then embark on a killing spree that would end with the assassination of Barack Obama, clearly drew inspiration from a criminal white nationalist group called The Order. In the early 1980s, members of The Order carried out a series of crimes that included robbery, counterfeiting, and a high-profile murder in order to advance their plans to found a white homeland.

The connection to The Order is evident in the numbers the two men had scrawled on their car: 14 and 88. The so-called Fourteen Words is a slogan—”We must secure the existence of our people and a future for white children”—coined by Order member David Lane, who also authored an article called The 88 Precepts. In white supremacist circles, 14-88 is a shorthand expression of allegiance to the beliefs put forth by Lane and The Order. Their aim was to establish a whites-only nation in the Pacific Northwest, where they could preserve the Aryan race from being polluted by nonwhites and enslaved by what they called the Zionist Occupied Government of the United States. (Lane also advocated polygamy and a kind of European paganism he called “Wotanism.”)

The plot hatched by Cowart and Schlesselman seems to have posed little real threat to Obama: Their plans to
“dress in all white tuxedos” and top hats and “drive their vehicle as fast as they could toward Obama shooting at him from the windows” is as unlikely as it is grotesque. Considering the nation’s history of deadly school shootings, however, the skinheads’ plan to rob a gun store and then shoot 88 students and behead 14 more at a predominantly black high school is (with the possible exception of the beheadings) frighteningly plausible.

A look at Cowart and Schlesselman’s model is sobering as well. For two years, from 1983 to 1985, The Order—also known as the Brüder Schweigen or Silent Brotherhood—was active, violent, and deadly. In order to finance their mission, the gang robbed a series of banks and armored cars and ran a counterfeiting operation, and was best known for the 1984 murder of Denver talk-show host Alan Berg. The group’s founder, Robert Jay Mathews, modeled himself after the main character in National Alliance leader William Pierce’s The Turner Diaries. Mathews was killed in a fiery shootout with federal agents in 1984, while David Lane was arrested in 1985 and died in prison last year while serving a 190-year sentence. Both have become heroes and martyrs to the white supremacist movement.

During the heyday of the racist far right in the 1980s, The Order was only one of the groups active across the United States. (I reported on that subculture for years, and produced a book and a film about it.) But those who track the white power movement generally view it as in decline after the 1980s—swallowed up in part by the onset of Christian fundamentalism, muffled by the anti-government policies of conservative Republicans, and floundering around without clear purpose or leadership. Yet remnants of it have clearly survived. They surfaced with horrific results in Oklahoma City in 1995, after Timothy McVeigh also found inspiration in The Turner Diaries and The Order. And they can be found among today’s skinheads and their fellow travelers. Some of these are part of biker gangs—including the Sons of Silence, who were implicated in a threat against Obama at the Democratic convention in Denver. Some have joined the anti-immigrant vigilante movement, committing drive-by shootings of Mexican laborers. Others are scattered around doing their own thing, picking fights in bars, beating up gay men or random African Americans. According to one report, their numbers in the US military have grown as recruitment efforts become more desperate.

Wherever they exist, white supremacists are clearly coming out of their dark corners in response to Obama’s presidential campaign. Both federal law enforcement officials and independent organizations that monitor hate groups are reporting increased traffic on the Internet, and even a kind of twisted optimism that Obama’s election will produce a “backlash” and lead to the white uprising they’ve dreamt about. In June, David Duke wrote, “Obama will be no worse for us than any of the White sell-outs that came before him. But, Obama will be a clear signal for millions of our people. Obama is a visual aid for White Americans who just don’t get it yet that we have lost control of our country, and unless we get it back we are heading for complete annihilation as a people…Obama is the wake up call.”

I’ve heard similar statements this month while traveling across the country with a crew from Guardian Films. In Missouri, we interviewed Steven Boswell, member of the National Socialist Movement, who says he is “hearing things coming out of people’s mouths now” that he never heard a few years ago, like “that there’s gonna be a race war coming up, and we better be ready for it.” He predicts that “as the economy continues to get worse, as our country continues to be overrun by Mexicans, as Obama gets elected and takes office, there will be opportunities that we have to be ready for and have to capitalize on.”

This is all sadly consistent with the long history of American Nativism, in which periods of social insecurity and economic despair have yielded increased racism, anti-Semitism, and xenophobia, together with a populist distrust of national government. It was during the farm crisis of the 1980s, amidst an epidemic of foreclosures, that I last heard rural Midwesterners describe elaborate conspiracies in which Jewish bankers—who sometimes had ties to international communism, as well as to the black and brown people who served as their frontline troops—had already taken over the US government, and would soon arrive to deprive “sovereign” white men of their land, their rights, their freedom.

Twenty-five years later, I’m hearing thinly encoded messages that suggest that this kind of thinking still prevails among some people here in the heartland—perhaps gaining new fuel from the apocalyptic financial meltdown. In Missouri last week, as we filmed a story on ethanol, a plant manager shared with the Guardian‘s correspondent his belief that Obama is not only a Muslim, but also hinted that he may be the anti-Christ whose coming was predicted by the Book of Revelation.

Such beliefs seem to be once again finding purchase among people who would never sport a swastika tattoo or identify as white supremacists, but rather think of themselves as hardworking, patriotic Christians who have been double-crossed by the system. When the despair runs deep enough, and finds no other outlet, it can veer into the kind of racialist, paranoid populism that is both more understated and more widespread—and thus more frightening—than the skinheads with their sawed-off shotguns and Nazi salutes.

Some portions of this piece originally appeared on Guardian Films Road to the White House blog.