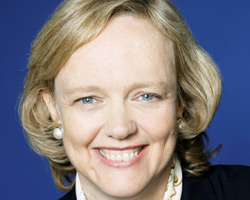 Does John McCain really think Meg Whitman would make a good treasury secretary, or was he just trying to win over a few Hillary voters when he was asked a question on this topic during Tuesday’s debate? I suspect the latter. We all know that eBay is the province of millions of housewives making a few bucks selling yard-sale junk, votes McCain desperately needs. And clearly, by growing eBay into a billion-dollar company during her 10-year tenure as CEO, Whitman made many of those work-from-home jobs possible. But just because she got rich with one of the few early Internet companies to survive the dot-com bubble doesn’t mean she’s fit to run the Treasury Department.

On the plus side, Whitman has a degree in economics from Princeton and a Harvard MBA, and she spent her early career working for big companies like Hasbro, Stride Rite, and Disney. She also has the ego of a CEO that might serve her well among the G-men at Treasury. (She donated $30 million to Princeton to create a new college named after
herself.) But she has virtually no experience in the financial sector for which the treasury secretary is directly responsible. Her resume shows scant evidence of fluency with such complex financial products as derivatives or credit swaps, which are in desperate need of thoughtful regulation, and little background in such mundane but critical things as monetary policy.

Her familiarity with the inner workings of Washington are equally thin. While she’s supposedly mulling a run for governor of California, Whitman never registered with either political party until she went to work on Mitt Romney’s ill-fated presidential campaign. She’s also never held a government job, a problem that’s hampered current Treasury Secretary Henry Paulson, whose minimal political experience has affected his ability to move legislation through Congress.

More importantly, the treasury secretary has just been empowered to buy up $700 billion worth of toxic debt from troubled financial institutions. The job will require overseeing a massive cleanup operation, figuring out just how much those mortgages are really worth and not losing even more of the taxpayers’ money on them. Whitman’s track record on valuing assets isn’t encouraging. As CEO of eBay, she way overestimated the potential of Skype, the online phone service eBay purchased in 2005 for vastly more money than it was worth. The purchase is one reason that when Whitman retired in early 2008, eBay’s stock had lost nearly half its value over the previous two years.

If McCain really wanted to tap a woman for Treasury, he could have mentioned Sheila Bair, the head of the FDIC, who’s already up to her ears managing the wreckage of the financial crisis. Bair has lots of government experience, which includes working on the Hill for Bob Dole and as an assistant secretary at the Treasury Department in Bush’s first term. There, back in 2001, she sounded an early alarm about the potential dangers to the economy posed by the subprime lending industry and has won praise from consumer advocates for consistently calling for better regulation.

Bair spent some time as a regulator at the Commodity Futures Trading Commission and as senior vice president for government relations for the New York Stock Exchange. Since taking over the FDIC in 2006, she has overseen the sales of Washington Mutual and Wachovia, as well as the takeover of IndyMac, which in July went down as the second-biggest bank failure in US history. One of Bair’s first moves at the FDIC was to purchase a database of information about securitized loans, which quickly led to the discovery that mortgage companies were throwing underwriting to the wind. As a result, Bair was an early proponent of freezing adjustable-rate mortgage “resets” to prevent the massive number of home foreclosures that ultimately occurred, showing that she’s had her eye on Main Street as well as Wall Street.

Bair has virtually every credential the next president might want in a treasury secretary. She’s more qualified for the job than a lot of men who’ve taken it. Yet McCain only has eyes for Meg, an indication that he still doesn’t have a serious handle on the economy or even what’s going on in Washington to fix it. More cynically, his pandering to eBay moms with his plug for Whitman falls into the same category as his choice of Sarah Palin as his running mate. Women, in McCain’s world, are peripheral figures at best, and at worst, they’re affirmative-action candidates, chosen mostly for their appeal to voting blocs, not because anyone believes they are the most qualified candidates for the job.