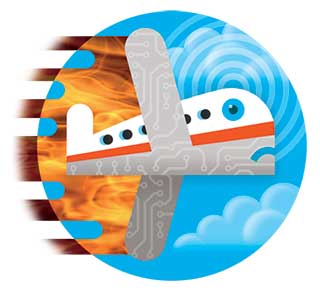 in 2006, Mother Jones reported that the wires in millions of Ford vehicles were insulated with Kapton, which has a tendency to crack and cause electrical fires. Turns out Kapton is also widely found in commercial aircraft. “It is in nearly every airline,” says Edward Block, a former Pentagon wiring expert who wants the material banned. Kapton has caused problems on the space shuttles and has been removed from some military aircraft and Air Force One, but Block estimates two-thirds of the country’s 19,000 airliners still use it.

The Federal Aviation Administration keeps no records of how many planes use Kapton, and its new wiring guidelines don’t mention it. Yet Bill Linzey, who works with the faa to model the effects of wiring damage, says Kapton “is a concern that should be monitored.” A more practical alternative to rewiring thousands of planes, he says, is a preemptive fix, such as American Airlines’ March grounding of hundreds of its MD-80 planes to ensure that its own wiring rules—designed to reduce the risk of Kapton fires—were being properly followed.

“A lot of effort has gone into maintaining and inspecting wires,” Linzey says about the airlines. “What they’ve done seems to have been working. Unfortunately, the only way you find out if it hasn’t is if something really bad happens.”