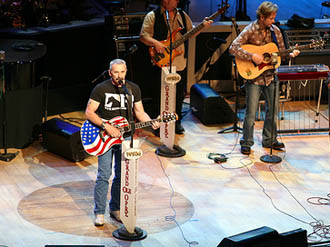 All the energy-policy watchers who are shaking their heads in disbelief over Congress’ capitulation on offshore drilling can blame Newt Gingrich, John McCain, and Aaron Tippin.

Ah. Well, remember Willie Nelson’s character from Wag the Dog, the 1997 film wherein a presidential administration concocts a phony war to distract the public from its domestic scandals? Nelson plays a political operative who creates and circulates a stirring song to rally public emotion behind the president’s stage-managed war effort.

In “realityville,” that songwriter is Aaron Tippin, a country & western singer who is contributing his talents to the public relations cause of American Solutions for Winning the Future, Gingrich’s new 527 organization.

Released on September 11, Tippin’s new anthem, “Drill Here, Drill Now,” is a folksy call for Congress to do more or less what it just agreed to do: let the offshore drilling moratorium expire. The singer’s home page, where you can hear the song and download it for 99 cents, also features lyrics:

And the chorus: Drill here, drill now / How ’bout some oil from our own soil that belongs to us anyhow…

I put in a call in to American Solutions to ask whether it paid Tippin to write “Drill Here, Drill Now,” but heard nothing back. The singer’s press release doesn’t answer that question, noting only that Tippin put out the song “in direct alignment with” Gingrich’s group, whose “Drill Here, Drill Now, Pay Less” campaign has collected nearly 1.5 million signatures on a petition urging legislators to “act immediately” to lower gas prices and reduce dependence on foreign energy sources by expanding domestic production.

The group also has been running ads to that effect. So far in the 2008 election cycle, according to OpenSecrets.org, American Solutions has raised close to $15 million—including more then $2 million from right-wing casino magnate Sheldon Adelson.

Newt Gingrich, the release notes, “has always been a country music fan,” and “Tippin understands and has experienced first-hand the importance of energy independence.”

The claims of Gingrich’s group are dubious, however. According to the Energy Information Administration, opening the outer continental shelf to further oil and gas drilling could eventually provide an additional 18 billion barrels of crude, and possibly more. But to quote an EIA report regarding the likely result, the agency’s projections “indicate that access to the Pacific, Atlantic, and eastern Gulf regions would not have a significant impact on domestic crude oil and natural gas production or prices before 2030.”

As far as lowering US gas prices, even the American Petroleum Institute isn’t prepared to make that claim directly. “Economic fundamentals suggest that more supplies put downward pressure on prices,” the API notes vaguely in its online FAQ. “Concerns over future oil and natural gas supplies have added volatility in global oil markets so if the US begins to develop its own domestic resources it would send a powerful signal to these markets.”

None of this has stopped John McCain from embracing Gingrich’s slogan whole-hog. “Last month, the president finally lifted the executive ban on offshore oil and gas exploration, and called on Congress to lift its ban as well,” McCain told the National Urban League on August 1. “Lifting that ban could seriously lower the price of oil, and Congress should get it done immediately. We need to drill more, drill now, and pay less at the pump.”

This wouldn’t be the first time Aaron Tippin has cashed in on a patriotic ditty. Shortly after 9/11, he released “Where the Stars and Stripes and the Eagle Fly,” his most successful crossover single. According to his website, Tippin has made guest appearances on “Hannity & Colmes,” “Fox & Friends,” “Larry King Live,” “the G. Gordon Liddy Show,” MSNBC, “the Bill Bennett Show,” “Fox News with Colonel Bill Cowan,” the Pentagon Channel, “the Martha Zoller Show,” and “the Neal Boortz Radio Show.”

And on Saturday night, swing-state voters in Clyde, Ohio, can catch the singer live at the Clyde High School auditorium. The next night, he’ll be at the Jamestown Savings Bank Ice Arena in Jamestown, New York. And come December 8, you can catch “the hardest-working man in country music” on McCain’s home turf, regaling the crowd at the Marine Corps Air Station in Yuma, Arizona.