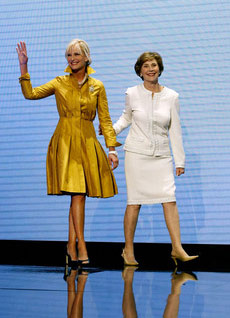 Vanity Fair added up the value of all the parts of Cindy McCain’s ensemble Tuesday night and came up with this:

Why is Cindy McCain’s $300,000 outfit relevant? Because just one day later the GOP spent the evening slamming Barack Obama as an out-of-touch elitist (using, ironically, former CEOs Meg Whitman, Carly Fiorina, and Mitt Romney to make the case). For reference, here are some things you could do with the money it took to buy Cindy McCain’s outfit.

– Buy the average American home, which costs $266,00.
– Fund the $5,000 tax credit John McCain proposes giving to working families to help with the annual cost of health care. You could cover 60 families.
– Buy 30,000 anti-malarial bed nets, including distribution to Africa and education on use for recipients.
– Pay the tuition of 59 Arizona State University students.
– Fly a Learjet 60XR for two and a half days at the price of $4,800 an hour (it’s the only way to get around Arizona, you know).
– Provide 6,000 students with school desks taken away by a schoolteacher that Mike Huckabee knows.
– Give tire gauges to 75,949 Americans hit hard by the price of gas, so they can get better mileage in their cars. Or so you can mock Barack Obama.
– Send nine community organizers and one part-timer into the streets to work for a better America (hahahaha!).

Look, there’s nothing wrong with being rich. But there is something wrong with the party that has been in bed with the super-rich and with Big Business for decades, and has consistently pushed policies that benefit those interests, claiming to know the pulse of the working man. The price of Cindy McCain’s dress isn’t relevant because of Cindy McCain, the woman can wear what she wants. It’s relevant because of what it illustrates about the Republican Party.