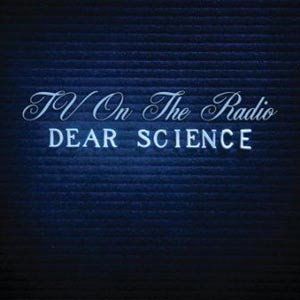 No, that comma is not a misprint, although the verdict is still out on the capitalization of “on” and “the.” Jeez, I know I’m not a real writer, but come on, TVOTR, get with the grammar program. Are you guys like those Midwestern sign-makers who put quotes around things for emphasis, advertising “clothes” for “sale”? I mean, even Panic at the Disco dropped the exclamation point!

Honestly, though, I’d forgive this band almost anything. I’d say they’re tied with Queens of the Stone Age for highest ratio of music quality to cover art crappiness, for instance. But in TV on the Radio’s short career, they’ve been incredibly ambitious, combining a creative experimentation with astute social and political awareness in a way that makes them kin to fellow-airwave-referencing combo Radiohead. But while Thom Yorke and crew produce expansive, soaring tunes that can carry across a field, TVOTR have always aimed inward, towards sonic density. Their 2006 release, Return to Cookie Mountain, took the dark themes of their first album, Desperate Youth, Blood Thirsty Babes, and dove even deeper, but on Dear Science, they seem to have come to terms with some inner turmoil and returned to the surface.

At times, Dear Science almost sounds, well, jaunty: the album opens with “Halfway Home,” where a droning guitar note is livened up with some retro “bah-bah-bah” background vocals. I’ve already remarked on the funky beat on “Golden Age,” and these smooth disco grooves show up elsewhere too, like on “Crying,” whose rhythm guitar could be straight out of a KC and the Sunshine Band number, although I doubt KC would encourage you to “take this car/and drive it straight into the wall.” There’s also a newfound emphasis on clear synthetic tones here: “Crying” ends with delicate beeping keyboard trills, and “Dancing Choose” is led by a cheap double-time drum machine and a buzzing synth bassline.

Like Radiohead on In Rainbows, TV on the Radio have mellowed out a little, while maintaining a focus on trying new things. Piano-led ballad “Family Tree” seems to be a love song, although its surreal lyrics about “the cozy red rainbows shaking off halos” offer only the dreamlike impression of a nursery rhyme. Another subtle highlight, “Love Dog,” laments that “patience is a virtue until its silence burns you” over a 6/8 beat and a hypnotic electric piano, until a string section slowly builds in strange and beautiful chords on top, and a looped vocal swirls around in a distorted echo. It’s one of many profound and lovely moments here. It all makes me wonder if they shouldn’t retroactively switch album names with Cookie Mountain, since that collection seemed to be a cry of anger aimed at the heat death of the universe, while Dear Science reaches heights that are surprisingly sweet.

Dear Science, with or without the comma, is out 9/23 on Interscope.

Listen to streams of “Dancing Choose” and “Golden Age” at their website here.