So the debate is on. What’s going to happen? 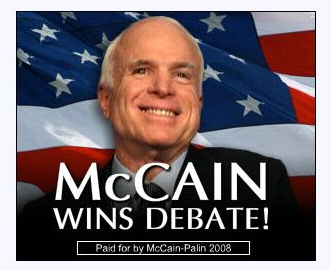 Well, if you believe the McCain campaign, their man has it in the bag. The ad at right is already running on the web. It was spotted by Chris Cillizza.

For my part, I actually don’t think candidates ever really win or lose these things. Following the debate there will be approximately one zillion mouth-hours spent by TV pundits and campaign surrogates talking about how candidate A delivered a commanding performance or how candidate B convinced America that he is presidential enough for the job, but historically the best a candidate can expect to get coming out of a debate is a 2.25 point bounce. When Bush lost 2.26 points coming out of the first 2004 debate with Kerry, it was the largest single-debate swing since 1988.

The best a candidate has ever done over the course of an entire debate season (there are, as you almost certainly know, two or three debates every campaign), is a 3.5 point bounce, which Bush got in 2000 after his three debates with Gore. The average swing after a debate season, dating back to 1988, is a paltry two points. And there’s nothing to say that that two point bounce isn’t wiped out by the events of the campaign’s homestretch.

Analysis of the debate is of course welcome. But when the talking heads reach into their bag of sports analogies and tell you that one of the candidates “landed a knockout punch” or “hit a home run,” don’t believe them. It’s a safe bet that both candidates did well enough to reassure their supporters but not well enough to swing an appreciable number of undecideds. Journalists would spend their time better by fact-checking the candidates, searching for hypocrisies or panders, and examining the candidate’s answers for reflections of character, readiness, and future policy decisions.

(Much love to fivethirtyeight.com for help with the numbers.)

Update: Really good video on the history of presidential and vice-presidential debates over at PBS.