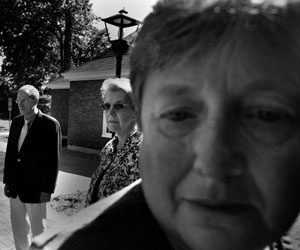 
They looked like they had walked off a film set, the two men standing at the door of the Library Connection in Windsor, Connecticut, as they ?ashed fbi badges and asked to speak to the boss. Director George Christian courteously shepherded them into the office. By the hum of the Xerox machine, one agent explained to Christian that the bureau was demanding “any and all subscriber information, billing information and access logs of any person or entity” that had used computers between 4 p.m. and 4:45 p.m. on February 15, 2005, in any of the 27 libraries whose computer systems were managed by the Library Connection, a nonprofit co-op of library databases. He handed Christian a document called a national security letter (nsl); it said the information was being sought “to protect against international terrorism.”

Like a children’s librarian during story hour, the agent used his ?nger to draw Christian’s attention to one line in particular: The recipient of the letter could not disclose “to any person that the fbi has sought or obtained access to information or records.” It was a lifetime gag order; break it, and he could be looking at ?ve years in jail. “I believe this is unconstitutional,” said Christian politely. In response he got a threatening scowl, a business card, and instructions to have his lawyer call the fbi.

Christian did call his lawyer as soon as the agents were gone—and then he called Peter Chase, another library director and member of the Library Connection’s executive committee. “Where is the court order?” Chase asked.

“There is none,” replied Christian. “They said they didn’t need one.” Christian was being ordered to turn over records on library patrons simply because an fbi agent had told him to. He called a huddle with the rest of the Library Connection’s executive committee, librarians Janet Nocek and Barbara Bailey. There, they passed around the nsl. Their attorney then announced that by virtue of having read the letter, everyone in the room was now bound by its provisions, and therefore gagged. It was as if they’d been exposed to radioactivity. That was the beginning of a yearlong battle pitting the four librarians, barred from speaking publicly and identified in the media only as “John Doe,” against the anti-terrorism enforcers of the Bush administration.

National security letters are a little-known fbi tool originally used in foreign intelligence surveillance to obtain phone, financial, and electronic records without court approval. Rarely employed until 2001, they exploded in number after the Patriot Act drastically eased restrictions on their use, allowing nsls to be served by fbi agents on anyone—whether or not they were the subject of a criminal investigation. In 2000, 8,500 nsls were issued; by contrast, between 2003 and 2005 the fbi issued more than 143,000 nsls, only one of which led to a conviction in a terrorism case.

Abuse has also been rampant. An investigation last year revealed that the fbi had broken regulations governing nsls in more than 1,000 cases. Among the violations: failing to get proper authorization, making improper requests under the law, shoddy record keeping, and unauthorized collection of telephone or email records. Such misuse has cast a long-lasting shadow over countless innocent Americans. Even when an investigation is closed, information gained through an nsl is kept indefinitely in the fbi files.

To protect their patrons, the four librarians engaged the national office of the American Civil Liberties Union in New York. They challenged the constitutionality of nsls; they also wanted their gag order lifted so they could participate in the national debate over renewal of the Patriot Act. “People say very confidential things to our reference librarians,” explains Chase. “They have medical issues, personal matters. What people are borrowing at a public library is nobody’s business.”

The ?rst hearing of the Library Connection case took place in federal court in Bridgeport, Connecticut, in August 2005. Government lawyers had declared that the librarians’ presence posed a threat to national security (since people might guess their identity), so they were barred from attending, and were only allowed to watch the proceedings on closed-circuit TV. Similarly, when the “John Doe” librarians went to an appeals court hearing in Manhattan, their aclu attorneys instructed the four not to enter the room together so that no one might guess who they were. John Doe New York—an Internet service provider whose case had been joined with the librarians’ on appeal—was also in the room, but the librarians did not know who he was.

Being the target of a terrorism investigation and forbidden to talk about it became an increasingly surreal experience. One day Chase’s 21-year-old son dashed out of the house to greet him, looking ashen. “Dad, you just got a call from the Associated Press saying the fbi is

investigating you. Is that true? Why haven’t you told us?” Chase was unsure how to respond. He didn’t want to lie, but he also didn’t want to get his son caught up in the nsl mess. “I’m involved in a case,” he said slowly and deliberately. “I can’t talk about it. And it would be best if you didn’t tell anybody about that phone call.”

That was in November 2005. The Patriot Act was reauthorized in March 2006. Six weeks later, the Justice Department informed the aclu that it would no longer contest the Connecticut librarians’ demand to lift their gag order. The Supreme Court subsequently ordered the Justice Department to unseal the court documents in the case. Among the evidence the government had tried to keep secret were quotes from previous Supreme Court cases; copies of New York Times articles; and the text of the Connecticut law that guarantees the confidentiality of library records. The Justice Department had also sealed arguments made by the aclu attorneys, including this passage: “Now that John Doe’s identity has been widely disseminated, the government’s sole basis for the gag has wholly evaporated.”

In September 2007, a federal court ruled in the case of John Doe New York that the entire national security letter provision of the Patriot Act was unconstitutional. US District Judge Victor Marrero said that secretive nsls are “the legislative equivalent of breaking and entering, with an ominous free pass to the hijacking of constitutional values.” The Bush administration has appealed the decision, and John Doe New York remains gagged. But in San Francisco, another librarian has managed to beat an nsl: In May, the fbi withdrew a letter issued to the Internet Archive, a digital library, after a legal challenge brought by the aclu and the Electronic Frontier Foundation. “A miscarriage of justice was prevented here,” eff staff attorney Marcia Hofmann said at the time. “The big question is, how many other improper nsls have been issued by the fbi and never challenged?”