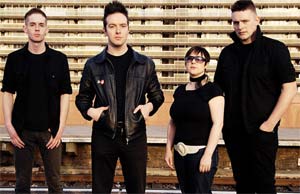 Like with most things, I’m a little late to the party on this one. This Scottish quartet came in 4th in the BBC’s “Sound of 2008” poll, and NME ranked the first version of their single “Daddy’s Gone” as their #2 song of 2007. Well, Alan McGee was way ahead of everybody: the Creation Records svengali who discovered Oasis spotted them in 2006. But there’s still time to get on board before the backlash!

If you’re wondering, here’s what they sound like to me: imagine the Jesus & Mary Chain got off the drugs (mostly) and did some songs with Billy Bragg. There’s a homey, folksy, eternal quality to their music, but the fuzzy almost-rockabilly sound lines them right up with hipsters like The Raveonettes. But while those two live out their ’50s cinematic fantasies in their lyrics, Glasvegas sing about what they know, with a brutal plainness that Hemingway might have admired. “Daddy’s Gone” offers no resolution, just emotion: “To see your son on Saturdays/What way is that to live your life?” New single “Geraldine” floats in on a Brian Eno-style whisper of guitar noise, and the stadium-size chords are definitely reminiscent of U2. But lead singer James Allan has a thick Scottish brogue that seems to double the syllables: “My name is Geraldine, I-eem yee-er sow-cial woer-er-kerrr!” Now that, my friends, is an accent.

The band are planning a quick tour of the East Coast in September and October, and while they just signed to Columbia, apparently the debut album won’t be out until 2009. Oh well. Watch some videos after the jump.