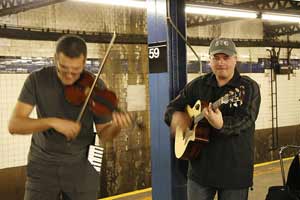 Does that include Oasis? Oh, sorry, I thought they said “frustrating.” A poll commissioned by O2 Undiscovered has found that 20 percent of people questioned consider themselves “frustrated musicians,” i.e., they wish they could toss aside their current job choice for an exciting music industry career. Respondents indicating that music was their true love included 11 percent of construction workers and 10 percent of doctors. Does anyone else feel a bit anxious knowing that the people building your house or slicing open your belly are daydreaming of landing in the Billboard charts? Actually, maybe they just want to be rich: 25 percent of respondents in the survey said The Beatles would be “the ideal band to forge a career in” if they could pick any band in history. What, not The Rutles?

The study did return one serious finding: three quarters of respondents felt they “had not been encouraged” to pursue a career in music at school or at home, and half felt schools should provide more of a musical education. I’ll support that, although as Obama says, some of you might be the next Lil Wayne, but most of you won’t. Now back to taking out my appendix, dammit!