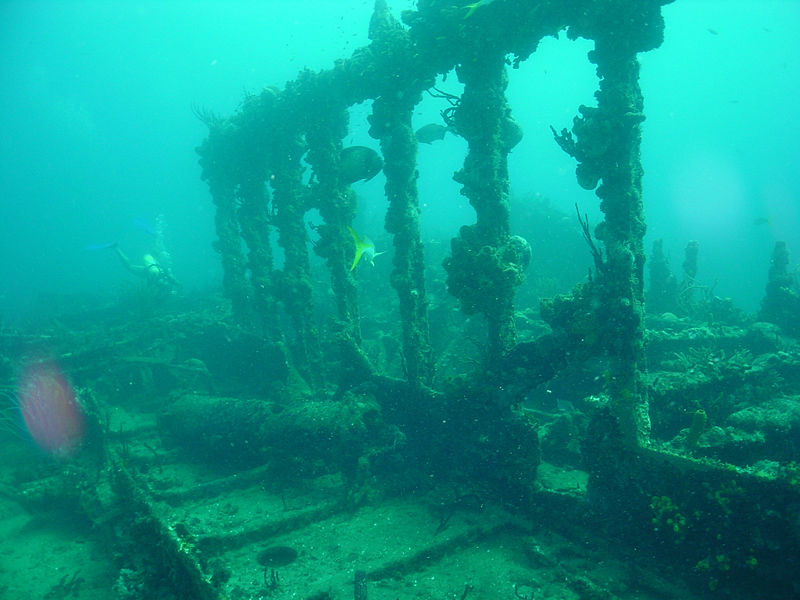 Shipwrecks on coral reefs appear to increase the invasion of alien species. A US Geological Survey study finds unwanted species completely overtake the shipwreck and eventually the surrounding reef, eliminating all native corals and dramatically decreasing the diversity of other reef organisms.

Sadly, we’ve been deliberately sinking ships for decades, imagining they might “anchor” healthy new reef communities. But the new study published in the open access journal PloS One is the first to document how manmade structures rapidly destroy the coral community.

The study was conducted at Palmyra Atoll National Wildlife Refuge in the central Pacific. This remote area has seen little human activity since WWII. Scientists began surveying a 1991 shipwreck in 2004. Since then, they’ve observed exponentially increasing populations of a anemonelike animal, Rhodactis howesii, around the wreck. The densities decrease with distance from the ship. Although Rhodactis are rare to absent in other parts of the atoll, they’re also populous around buoys.

The exact relationship between shipwreck and Rhodactis is unknown. But one possibility is that iron leaching from the ship (and mooring buoys’ chains) somehow promotes the growth of R. howesii. Given the sheer speed of ecosystem changes, the researchers doubt that even the removal of the shipwreck will halt the alien invasion.

Will this be our epitaph? Veering from one tragic phase shift to another. The ship that sank was a longliner—among the most horrifically destructive technologies ever invented. . . and still deadly, even in death.