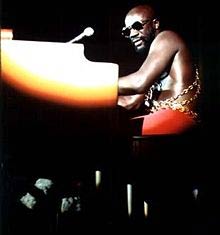 Some commentators are saying it’s a shame that young people know Isaac Hayes only as the voice of South Park‘s “Chef,” but I don’t know, at the very least it might be a way for Comedy Central-watching tweens to discover the soul legend. Hayes, who passed away yesterday in Memphis at the age of 65, was able to dabble in self-parody on South Park only because he had such a profound influence on music, almost single-handedly creating an entire genre of sexy, edgy funk. Entertainment Weekly‘s piece on Hayes rightly calls the theme from Shaft the “hippest track ever to win the Academy Award for best song,” and NME points out the album was the first by a solo black artist to top both the R&B and pop charts. To date, it’s estimated his music has been sampled in over 200 songs, by artists from Snoop Dogg to Portishead; blog Hip 2 Da Game has a partial listing. [Edit: The Fader‘s blog has a link to a mix from DJ Wonder including original Hayes material and tracks that sampled his work, check that out here]. I’ve included a few videos from artists who sampled Hayes and the source tracks after the jump.

Honestly, looking around for these YouTube links, I’ve had Hayes’ music on all day, and I’m wondering why I haven’t been listening to it all the time: the extended instrumental jams are groovy and hypnotic, incredibly forward-looking. “Look of Love,” after its long central instrumental section, breaks down to a beautiful flute solo, and finally features Hayes singing “don’t go” under a majestic echo, his voice seeming to move off to a great distance, until it finally disappears.

Portishead – “Glory Box”
Originally from 1994’s Dummy, this performance is from the Roseland Ballroom sessions in 1997.