I love a well-made chart. And Ezra Klein just so happens to have one. 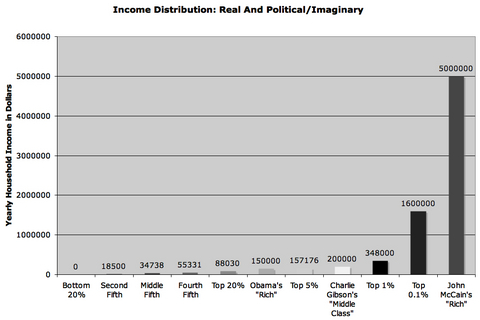 As you can see, the chart reflects the answers McCain and Obama gave when asked to define “rich” at the Saddleback forum over the weekend. Obama said $150,000, an income which would put someone in the 94th percentile of American earners, and McCain said $5 million, which is just completely preposterous. As Ezra points out, this is dangerous:

Asking the world’s tallest man to set cabinet heights, or the world’s strongest man to decide the tension of jar lids, is going to leave you with some pretty tall cabinets and some pretty tightly closed jars. Similarly, asking one of the world’s richest men to set your tax policy will end up with a pretty skewed set of policies: Say, a tax plan that gives his wife $370,000 in breaks. Again, nothing weird or malign: Just the naturally skewed perspective of someone who lives on a particular extreme, in this case, the extreme edge of the wealth distribution.

This is inevitable, of course. The American political system demands wealth as a condition of entrance. You have to be able to take time off in order to run for office (or even plan/contemplate a run for office), and you usually have to have a network of wealthy friends you can tap as donors and contacts. As a result, most people who make it to national politics are wealthy, and have the “naturally skewed perspective” that Ezra mentions.

I should add that there was hope for John McCain once. In 2001, he was one of two Republicans who opposed Bush’s tax cuts, saying, “I’d like to see much more of this tax cut shared by working Americans… I think it still devotes too much of it to the wealthiest Americans.” If you’ve seen his tax policy today, you know he no longer has such qualms.