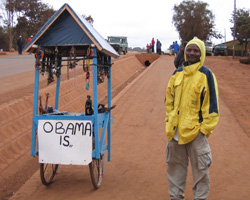 In December 2007, writer Andrew Sullivan proposed a hypothetical to illustrate Barack Obama’s power to change perceptions of America abroad. “A young Pakistani Muslim is watching television and sees that this man—Barack Hussein Obama—is the new face of America,” wrote Sullivan. “In one simple image, America’s soft power has been ratcheted up not a notch, but a logarithm. A brown-skinned man whose father was an African, who grew up in Indonesia and Hawaii, who attended a majority-Muslim school as a boy, is now the alleged enemy.” There is too much of the world in Obama’s identity for the international community to continue hating a country Obama leads, Sullivan argued.

Since Sullivan wrote those words, the idea that Obama can transform America’s image has become a truism so obvious it is almost a cliché. But while traveling recently in eastern Africa—Tanzania and Kenya—I found that the prospect of an Obama win still inspires hope and excitement. There is palpable interest in the US presidential race. And Obama generates widespread support not only because he is African American, but also because he is regarded as someone who can make the United States a trustworthy figure in the international sphere again. Eastern Africans believe Obama will turn America into a superpower that deals honestly and respectfully, protecting its own interests while also serving the interests of others. Obama likes to say that as president he will go to other countries of the world and say, “America’s back.” Many Africans appear to take him at his word.

The enthusiasm for Obama in Tanzania and Kenya may have something to with geography. Most African Americans trace their roots to West or West Central Africa. Obama’s lineage comes from the Luo tribe, which is based in the Eastern African nations of Sudan, Kenya, Tanzania, and Uganda. As a result, many people in those countries take an almost paternal pride in Obama and his success, and pay close attention to his bid for the White House.

That attention is not just among the elite. Stopping for diesel in a Tanzanian town of a few thousand, my brother wandered into a small store selling T-shirts. The shopkeeper saw his shirt, which said “BAM” on the front, and, momentarily thinking it said “Obama,” offered to trade any shirt in the shop for it. The value of the offer decreased considerably when the translation was cleared up. In the same town, we came across a man pushing a cart full of trinkets. On the side of the cart was a handwritten sign that said “OBAMA IS.”

“You like Obama?” I asked him. Very much, he said.

“Why?” I asked. He shrugged and said, “Better for the world.” Local boys that sold some of his goods for him wandered up as we were chatting. “Obama?” I asked them.

I pointed at the sign on the cart. “Obama is what?” None of the boys understood the question. Like many Kenyans and Tanzanians, their interaction with Westerners seemed to incorporate enthusiasm for Obama and little else. The owner of the cart said, “Obama is…” He stopped to think. “You tell me,” he said.

In Kenya, the elder Barack Obama’s home country, the interest in Obama appeared even stronger. When we stopped at a collection of five or six huts outside of Amboseli National Park to find water, a man approached our van and said, “Magazines? Any magazines?” I showed him a Newsweek that had Obama on the cover.

“Obama! The man from Illinois,” he said. I asked if he followed the American presidential election. “Yes. In magazines. Many Americans stop, give me Time, Newsweek.” I asked if he liked Obama. He grinned and said, “He will be tribal chief.”

“You know the White House?” I asked.

“Yes, of course,” he said. He became very serious and emphasized every syllable. “It is the race for the White House.”

He took the Newsweek from me and found a picture of McCain. “Look. So old. He is good too, but he is very old.” It was a sentiment that many Africans shared—John McCain might be a good man, but he is too old to lead the free world. And also, he came from the same party as Bush, a man who, as one tour guide explained, “wants to make war in every corner of the world.”

My new friend enjoyed showing off. “In 16 months, Obama will move troops out of Iraq,” he accurately summarized Obama’s plan for the Iraq War. “Fix Afghanistan and find Osama. He just visited Afghanistan.”

I had been traveling and had missed most of Obama’s overseas trip. I asked how it went.

“Good.” He smiled. “Visited Karzai. The president of France said Obama is his best friend. Everyone likes him.” He offered to trade me a huge Masaai spear for the magazine and seven American dollars. He was shocked when I turned down the spear—my concerns about airline restrictions couldn’t be translated. I gave him the magazine.

Certainly, not everyone in Kenya and Tanzania is captivated by Obama. A Masaai tribeswoman selling jewelry showed me her wares. “You’ve heard of Obama?” I asked.

“Yes!” she said. Her response was bright but a little vacant.

While winning the hearts and minds of ordinary Kenyans isn’t a foreign policy priority—you may have heard of other hot spots far more pressing—they are an excellent example of how American politics are being read by the world community. Our guide in Kenya showed up wearing an Obama ’08 baseball hat. To him, the Democratic senator promised something that not all Americans are sure they want. “America can change,” he said. “That’s what people believe.”