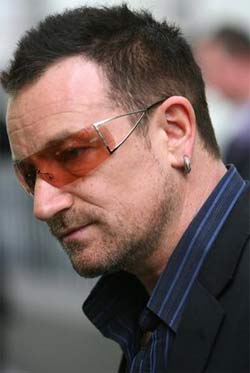 This is silly. Yes, U2 is supposedly working on a new album, No Line on the Horizon, with a tentative release date later this fall. But check out this ridiculous story: apparently a “cheeky holidaymaker” was strolling past Bono’s pad in the South of France and heard what sounded like new U2 songs blasting from the windows. Said pedestrian just happened to be carrying some sort of easily-accessible recording equipment with him, with which he taped the tracks, then raced home to post the recordings on YouTube. The fact that this has happened before makes it even less believable. I mean, how close can you even get to Bono’s house before the laser robots get you?

However, the recordings themselves (listen at Vulture) are oddly compelling, as lo-fi as you can get, featuring the buzzing of insects, passing cars (or possibly waves on a beach) and far-off conversations. While Vulture hopes the noises won’t make it to the actual album, there’s something kind of compelling about them, muffled far-off tunes on what sounds like a lovely summer night. It kind of reminds me of the KLF’s hypnotic Chill Out, a concept album meant to evoke a drive through Texas and Louisiana. Come to think of it, playing a bit of an artsy prank on the media by having your music “taped” from outside your house is kind of KLF’s style, too. Has Bono been taken hostage by sheep-wielding million-pound-burning art terrorists? Enjoy a bit of Chill Out after the jump.