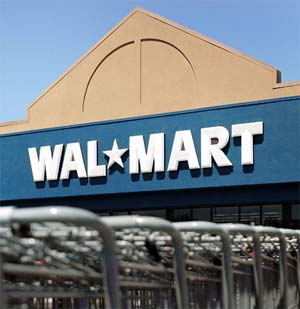 Let me get this straight. The music industry is in crisis, as sales plummet and stores consider eliminating CD sections entirely. Artists with name recognition are exploring new avenues of distribution, bypassing the retail store entirely. So, say you’re a beloved rock band with a highly-anticipated new album coming out. What do you do? How about you force your fans to jump through ridiculous hoops and go on a freakin’ retail scavenger hunt just to track it down? Brilliant! And thus, AC/DC is requiring that anyone interested in their first new album in eight years, Black Ice, to get in the SUV and head out to Wal-Mart or Sam’s Club to pick it up (starting October 20th, for $11.88). Not to be outdone, Guns n’ Roses are in the midst of negotiations with either Wal-Mart or Best Buy for exclusive retail rights for the mythical Chinese Democracy. Ah, the music industry: answering complaints that its business model is inconvenient by making things more inconvenient. Well, just you wait; when I release my album, it will only be available on a ledge halfway up the side of K2.