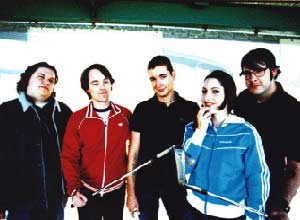 On my earphones this week are two bands I just recently got turned onto: Loquat and Thao Nguyen. Both are sweet with a touch of melancholy, and both remind me just a bit of previous decades.

Hear tracks after the jump:

The Bay Area’s Loquat has the same soft, light, and pretty but dark quality as Lush and Mazzy Star; bands that at some point or another worked their way into college radio hipness in the 90s. Loquat’s a little bouncier, though, like a distant cousin to New York’s Brazilian Girls. Their new album, Secrets of the Sea, comes out October 14 on Talking House Records.

Thao Nguyen, who performs with a band as Thao With The Get Down Stay Down, earns cool band name bonus points right off the bat. But her recent performance at the Independent in San Francisco (she’s on a national tour) really closed the deal for me. She’s got this punk rock-ness to her that gives her pop melodies some grit. And despite the fact that her voice almost reminded me of late-80s, early-90s singer/songwriter Edie Brickell a few times, it felt like something creative, new, and honest was happening onstage. Kill Rock Stars released her album in January, and this month is putting it out on vinyl, with bonus cuts.

Here’s a couple of tracks: