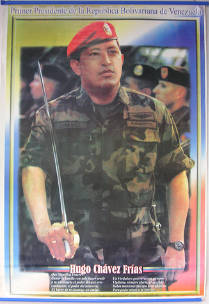 Eighty-five people were killed in Buenos Aires in July 1994, when a truck filled with explosives detonated outside the Jewish Argentine Mutual Association (AMIA). Since then, conspiracy theorists have had a field day speculating about who was responsible, but it is generally believed to have been the work of Hezbollah, the Iran-backed Lebanese militia group listed on the U.S. State Department’s list of foreign terrorist groups. The presence of Islamist militants, including Hezbollah, in South America—in particular, in the anarchic Tri-border Region, where Brazil, Argentina, and Paraguay meet—has long been suspected. According to the Los Angeles Times, though, terrorism analysts fear that Hezbollah is expanding its base in Venezuela.

Hugo Chavez’s government enjoys warm relations with Iran, Hezbollah’s financial and ideological patron. The countries have established numerous business ties, and in March 2007 agreed to flights between their capitals on IranAir—flights that include a layover in Damascus. (The State Department complained early on that passengers arriving in Caracas seldom were checked against immigration databases or had their passports stamped. Venezuela has reportedly stepped up security procedures as a result.) In June, the US government accused two Venezuelans of working with Hezbollah, obtaining finances and arranging travel. Such activities may represent things to come.

Linked to deadly attacks on Jewish targets in Argentina in the early 1990s, Hezbollah may be taking advantage of Venezuela’s ties with Iran, the militia’s longtime sponsor, to move “people and things” into the Americas, as one Western government terrorism expert put it…

Those deepening ties worry U.S. officials because Iranian spies around the world have been known to work with Hezbollah operatives, sometimes using Iranian embassies as cover, Western intelligence experts say.

In June, Assistant Secretary of State Thomas A. Shannon said Iran “has a history of terror in this hemisphere, and its linkages to the bombings in Buenos Aires are pretty well established.”

“One of our broader concerns is what Iran is doing elsewhere in this hemisphere and what it could do if we were to find ourselves in some kind of confrontation with Iran,” Shannon said…

Agents of Iran’s Revolutionary Guard and Hezbollah have allegedly set up a special force to attempt to kidnap Jewish businesspeople in Latin America and spirit them away to Lebanon, according to the Western anti-terrorism official. Iranian and Hezbollah operatives traveling in and out of Venezuela have recruited Venezuelan informants working at the Caracas airport to gather intelligence on Jewish travelers as potential targets for abduction, the Western anti-terrorism official said.

Photo used under a Creative Commons license from blmurch.