Daily satellite images of Greenland’s glaciers reveal the break-up of two of its largest glaciers in the last month. A massive 11-square-mile piece broke off the Petermann Glacier in northern Greenland between July 10th and by July 24th. That’s half the size of Manhattan. Between 2000 and 2001 the same glacier lost 33 square miles of floating ice.

What worries researchers from the Byrd Polar Research Center at Ohio State University is what appears to be a massive crack further upstream. A break-up there would doom 60 square miles, or one-third of what’s left of the massive ice field. 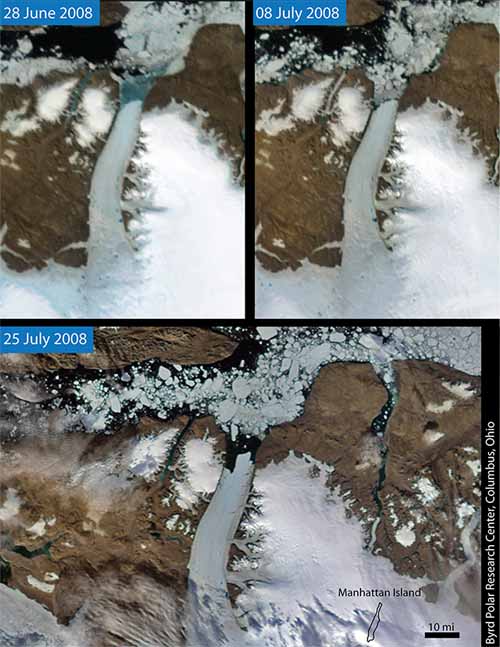 Meanwhile, the margin of the enormous Jakobshavn Glacier has retreated inland further than at any time in the last 4,000 to 6,000 years. The Northern branch broke up in the past several weeks, and the glacier has lost at least three square miles since 2007.

The Jakobshavn Glacier dominates the roughly 130 glaciers flowing out of Greenland’s interior to the sea, and is the island’s most productive glacier, calving one of every 10 Greenland icebergs. Between 2001 and 2005, it suffered a massive 36-square-mile loss of ice that raised awareness worldwide of global climate change.

Oh, yeah, and Greenlanders are growing potatoes for the first time since the Viking Age.