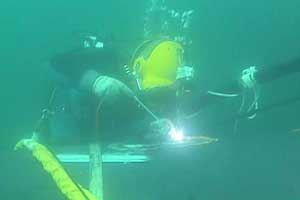 Underwater welding (Chino state prison, California)
Every year, 100 inmates enroll in this yearlong career-training program taught in a special diving tank.
Why it works: The program’s grads have a very low (6 to 12 percent) recidivism rate. And no wonder: After release, they can earn $100,000 a year in the construction and oil industries.

Victim outreach (North Carolina and Georgia)
Before a murder trial, a special advocate hired by the defendant approaches the victim’s family to see if they can agree on a plea bargain.
Why it works: The accused is spared the maximum sentence; the family confronts the perpetrator; and the state doesn’t have to pay for a trial.

*Drug court (nationwide)
Started in Miami in 1989, these courts offer treatment instead of incarceration for nonviolent drug offenders. They’ve since cropped up in 49 states.
Why it works: New York City’s drug courts have reduced recidivism by nearly one-third and saved more than $254 million in prison costs.

Furry friends (Lansing Correctional Facility, Kansas)
As part of the Safe Harbor Prison Dog Program, 100 inmates train abused and aggressive dogs to be adopted as pets.
Why it works: Helps inmates prepare for the outside world, and keeps them sane. “It helps them smile,” says public affairs officer Brett Peterson. (One inmate did more than smile: In 2006, convicted killer John Manard escaped inside a dog crate in the back of the program founder’s van. The couple was caught leaving a bookstore two weeks later.)

Family time (Coffee Creek Correctional Facility, Oregon)
Every summer, this women’s prison hosts a fair for inmates’ families, complete with a barbecue, games, clowns, and animals.
Why it works: In the words of one incarcerated mom, “It was the closest I’ve come to feeling human.”

Beyond meds (Washington)
Under the Dangerous Mentally Ill Offender program, inmates work with a support team of counselors and specialists before and after they get out.
Why it works: Participants’ recidivism rate dropped 20 percent.

The doctor is inside (Hampden County, Massachusetts)
Doctors and nurses from community nonprofit clinics make the rounds at the county jail every week. Prisoners are matched with medical providers near their homes so that they can continue treatment after release.
Why it works: With infectious-disease rates sky-high in prison (see “Sex and the Slammer“), health care on the outside can help manage illness and prevent further transmission.

The anti-supermax (Oak Park Heights prison, Minnesota)
This maximum-security facility operates under the philosophy that even the most dangerous prisoners need human contact, natural light, sensory stimulation, and exercise. Most inmates roam freely for much of the day.
Why it works: A former warden says that in its 23-year history, Oak Park Heights has never had a homicide or escape attempt.

*Correction appended: A print version of this story incorrectly listed New York City as the first city to have drug courts. The language in this piece has been changed to reflect the correct information. We regret the error.