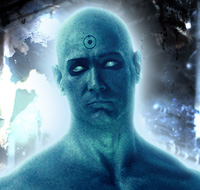 The actual movie’s not due for another seven and a half months, but the trailer for Watchmen is out. (Watch it after the jump.) Which means I and other fans of the graphic-novel masterpiece that the movie’s based on can get some answers to our nagging questions. Obvious questions like, Can a two-hour movie capture author Alan Moore’s brilliantly constructed storyline and artist Dave Gibbons’ impeccable yet pulpy atmospherics?

But beyond learning whether director Zack Snyder (300) has delivered a CGI-bloated mess, here’s the practical if prurient question that’s been lodged in my brain since adolescence, when talk of a Watchmen flick first surfaced: How will the movie portray Doctor Manhattan, the Smurf-blue, radioactive superman who likes to walk around with his, uh, nuclear facilities out in the open?

I’m kind of serious. Doc Manhattan is, I believe, the first comic-book crime fighter to forgo the pretense of wearing a skimpy, skin-tight costume to let it all hang out. Nudism actually makes a lot of sense for shape-changers: No one’s ever explained why, when the Hulk rips out of his civvies, his normal-sized pants become a pair of cut-offs. (Ang Lee tried to get around this by dressing him in spandex shorts.) If I recall, Manhattan’s reasons for going au supernaturel have more to do with physics than physicality (something about the laws of the universe not distinguishing between the atoms in clothes and skin or somesuch). Anyway, it all presents a challenge for the frontal-male-nudity-phobic Hollywood and the moviegoing public. Yet the Watchmen trailer has snagged an “All Audiences” rating even though it briefly, if blurrily, shows Doc Manhattan in all his sky-blue glory. Check it out:

I know: naked blue dude or not, that made absolutely no sense to 99 percent of the population. Which comes back to the question of whether Watchmen will be an unwatchable mess. I have to say the trailer looks visually faithful to the original, which is a good sign. And as for that Billy Corgan song…God help us all, indeed.