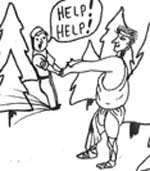 Via Queerty comes the story of Oklahoma County Commissioner Brent Rinehart, who decided to utilize the innovative format of the comic book as a reelection campaign tool. The comic attempts to illustrate Rinehart’s accomplishments including “veterans appreciation month” and “keeping the cross at the fairgrounds.” But the pages getting the most attention focus on the commissioner’s work against the agenda of “pedaphiles [sic], polygamists, and homosexuals.” These pages are, for lack of a better word, awesome: it turns out not only do gays want to lure young boys out of the forest, we also do it while wearing togas. Click the “continues” button to enjoy the two pages in question or get the whole pdf file (it’s worth it) at NewsOK.com here.

Alright, first of all, how much do I love Satan and that little angel scampering about the pages? Secondly, where can I buy some of those fashions on display at the gay pride march above: we’ve got extras from Doctor Who on the left, then another toga, and, apparently, Peter Pan. Overall, though, the drawing style reminds me of nothing so much as the uber-creepy cartoons on now-cancelled hyper-surreal MTV series Wonder Showzen: the giant heads teeter precariously on top of withered bodies, and our narrator’s distended grin and misshapen overalls make him look like a psychopathic Hank Hill. Comic book artists will tell you, when the words say one thing and the drawings appear to say another, it’s the drawings that usually win, so it’s hard to imagine even the wingnuttiest voter not being creeped out by this. At least Chick tracts look cool.