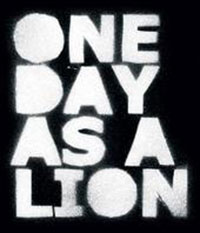 The first song, “Wild International,” which was made available on MySpace this week, is alright, but it could easily be mistaken for a middle-of-the-set song performed by Rage at Lollapalooza in the early 90s.

I have one or two huge Rage-fan friends that will no doubt say his new material is “amazing” and “awesome” and ridicule me for even thinking about dissing it. And my guess is that alt-rock/modern rock radio stations across the country will give this song a lot of love; not because it’s great, but because it’s got a built-in audience (Rage won a Grammy and saw an album go double platinum).

The drumming, from Jon Theodore (formerly of the Mars Volta) is really good; it’s that hip-hop/funk/metal beat we’ve heard before, but he puts a unique touch to it. Maybe it’s the sticks. Or lower-production value. Loud, distorted keyboards (produced by Mario C of the Beastie Boys) are a nice touch. It’s fun to hear two people produce this much energy and volume.

It’s always exciting to hear new material form an (arguably) iconic musician, but I’d love to hear a more experimentation in song structure, new sounds, and a sense of new direction. They’ve already been pegged Volta Against the Machine at least once, and judging by the first released track, that joke is fair game.