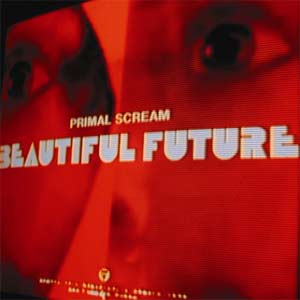 Primal Scream confuse the hell out of me. Are they fuzzed-out Jesus & Mary Chain imitators, acid house innovators, boring old Rolling Stones worshippers, electro-punk agitators, or is it all just a big joke? Answer: yes. The question, really, is whether you like their breakthrough successes enough to forgive their sloppy, derivative missteps; in the interest of full disclosure, this reviewer totally does. Critical consensus hails both the funky Screamadelica and the aggressive XTRMNTR as era-defining masterpieces, but I’ll even pull out 1997’s Vanishing Point now and then, a half-baked tribute to a totally-baked film, filled with churning electro-grunge and eye-rolling stage whispers of “Soul on ice! Soul on ice!” It’s fantastic. Like the Clash, even Primal Scream’s mistakes are compelling; on Beautiful Future, they often retreat to retro-Stones pablum and skeezy lyrics, and it’s still pretty great.

The album is saved from falling too far into moldy retro-rock by producer Bjorn Yttling (of popsters Peter Bjorn and John), who brought the band into his studio in Sweden to record the album. Unlike previous Primal Scream efforts, song lengths are kept pretty standard: a majority clock in under 4 minutes. The title cut opens the album with big, happy chords and even some wedding chimes, and whether or not it’s spittingly ironic, it’s a lot of fun. Okay, “Can’t Go Back” and “The Glory of Love” sound like Eagles of Death Metal outtakes, but track 7, “Beautiful Summer,” has the spooky dramatics of Death in Vegas.

The UK Guardian gives this album 2 out of 5 stars, mostly as a kind of payback for apparently being too soft on the band in the past, and mocks lead singer Bobby Gillespie’s vocals for attacking capitalism while he continues to enjoy its benefits, like, say, expensive drinks at fancy nightclubs. To this I say: whatever. Sure, they may not reflect his cozy life, or even make much sense, but they’re part of the atmosphere, one of excitement and menace, just crazy enough to keep you on edge. Eventually he quiets down and the guitar kicks in for a minor-key coda, and it’s like a salute to all the trouble you’ve seen. Excitement, menace, solidarity: Isn’t that what rock ‘n’ roll is supposed to be about?

Beautiful Future is out July 21st on Atlantic Records.