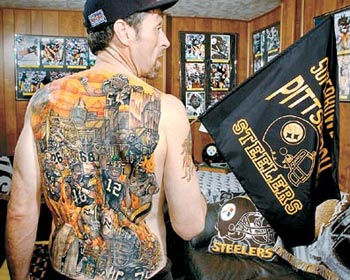 One thing politicians should never, ever do is disrespect storied professional sports franchises. Too many people are too invested in teams like the Cubs, the Red Sox, the Red Wings, the Packers, etc. — using them for phony political purposes deeply offends people. See an example of a true sports fan at right.

Maybe I’m just projecting. Today, I’m offended. John McCain is using the Pittsburgh Steelers, the greatest professional sports franchise in American history, for his personal gain. Also, he’s exploiting his record as a POW, but I’m offended less by that.

Here’s the deal. John McCain tells a story from time to time (it’s in his 1999 memoir “Faith of My Fathers,” for example) about how under pressure as a POW in Vietnam to give up vital information, McCain pretended to hand over the names of his squadron mates by reciting the starting lineup of the Green Bay Packers. The kicker was McCain’s CO, Ray Nitschke.

It’s an incredibly admirable story and it reminds you that underneath the artifice of campaigns that we spend so much time trying to peel away here at MoJoBlog, there are men and women of character who seek to lead the country.

But John McCain has thrown this story into the political ring. In an interview with KDKA-TV, a Pittsburgh CBS affiliate, McCain professed his boyhood love for the Steelers and retold the charming POW story. But this time he inserted the Steelers where the Packers had been.

Any sports fan will tell you, that’s just not cool.

The McCain campaign says it was an honest mistake on the candidate’s part. Maybe. He’s certainly heard or told the story plenty of times — after he wrote about it in his book, A&E made a movie about his life in which the Packers story is told twice. McCain was asked to comment about the movie’s retelling on CNN in 2005, and he confirmed the details. He repeated that the Packers had been the team. But who knows, maybe he just had the Steelers on his mind because he was in Pittsburgh and he reimagined the story. It’s easier to accept that version of what happened, because it’s kind of sickening to have this conversation at all.

But then you have to confront the fact that there have been a lot of these honest mistakes recently. On a number of occasions, McCain has gotten his facts wrong, or forgotten his position, or failed to understand how basic policy works, leaving his campaign to spin the situation away. Pretty soon we’re going to have to hold the guy accountable for what he says like any other politician.

Bonus: The Packers/Steelers POW story was once part of John McCain’s argument against torture:

“In my experience, abuse of prisoners often produces bad intelligence because under torture a person will say anything he thinks his captors want to hear–whether it is true or false–if he believes it will relieve his suffering. I was once physically coerced to provide my enemies with the names of the members of my flight squadron, information that had little if any value to my enemies as actionable intelligence. But I did not refuse, or repeat my insistence that I was required under the Geneva Conventions to provide my captors only with my name, rank and serial number. Instead, I gave them the names of the Green Bay Packers’ offensive line, knowing that providing them false information was sufficient to suspend the abuse.”