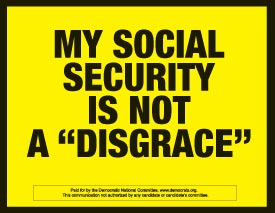 Social Security was not a battle John McCain wanted to fight. The Arizona Senator has avoided putting out a concrete plan on Social Security (his website, for example, doesn’t have a section on the issue), and he has been less than exact in his public comments on the subject throughout the campaign.

Unfortunately for him, his flub last week in which he described the basic funding mechanism of Social Security as a “disgrace” — “Americans have got to understand that we are paying present-day retirees with the taxes paid by young workers in America today, and that’s a disgrace, it’s an absolute disgrace, and it’s got to be fixed” — has given labor unions and seniors’ groups, in conjunction with the Democratic Party, the opportunity to highlight McCain’s past support for President Bush’s highly unpopular plan to privatize Social Security.

On a conference call with reporters today, a coalition of groups similar to the one that fought Bush’s privatization initiative in 2005 announced that they would mobilize their supporters and members in the hopes of informing voters nationwide of the fact that, as AFSCME International President Gerald McEntee put it, John McCain wants to “gamble with Social Security.” In addition to an online campaign, they plan to have volunteers protest McCain events in the near future. Many will be holding yellow signs provided by the DNC that say “Hands Off My Social Security” on one side and “My Social Security Is Not a Disgrace” on the other. According to a spokesman for the coalition, they will be “heavily incorporating the anti-privatization message on the road at each of the nearly 150 stops on the Bush Legacy Tour.” The DNC has made a video highlighting McCain’s record on Social Security to accompany the campaign.

McCain opened himself up to these attacks by refusing to take a firm position on the issue. In fact, Social Security appears to be one of an increasing number of issues where McCain has multiple positions at the same time.

But in March, McCain told the Wall Street Journal:

Q: In 2000, you campaigned for president on a plan to use a part of payroll taxes to create Social Security private accounts. Now your Web site talks about accounts as “supplements” to Social Security. Why the change?

A: Actually, I’m totally in favor of personal savings accounts and I think they are an important opportunity for young workers. I campaigned in support of President Bush’s proposal and I campaigned with him, and I did town hall meetings with him.

Today, the closest McCain will come to articulating a position is this: “I would like for young workers — younger workers, only — to have an opportunity to take a few of their tax dollars, few of theirs, and maybe put it into an account with their name on it.”

Is that close enough to privatization to freak out seniors? Quite possibly. Especially if they realize that all the money youngsters put into personal savings accounts would ordinarily be going to them. And the coalition of labor and seniors’ groups that spoke today on the conference call are going to do everything they can to recreate the magic of 2005, when they convinced not just seniors but a wide swath of Americans that privatization — or anything like it — was too much of a risk to Americans’ retirement security to be undertaken. As AFSCME President McEntee said today, “We’ve got some experience on this.”