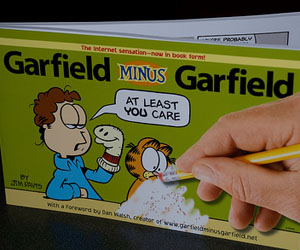 Photo used under a Creative Commons license by flickr user <a href="http://www.flickr.com/photos/williambrawley/">WiLLGT09</a>

As we entered the second half of 2008, I thought I’d take a look at Riff page view statistics for the year, just to see what online Mother Jones readers have been clicking on around this fun little blog. And what, dear Riffers, do you think was the number one post of the first six months of 2008? A post mocking George W.’s misinterpretation of a painting? A cynical look at coverage of the Iowa primaries? Abstinence pants? No, no and no. Our most-viewed post was my meditation on the subtext of late-capitalist anxiety in the comic “remix” Garfield Minus Garfield. Riff readers are stoned!

It turns out I was onto something: in the months since the piece’s appearance on the Riff, “G-G” has been covered in The New York Times, Time Magazine, and The Washington Post; the latter tracked down original Garfield creator Jim Davis, who called the work “an inspired thing to do.” So, who’s behind this now-phenomenally-popular bit of inspired photoshoppery? Meet 32-year-old Irishman Dan Walsh, who turns out to be a really nice guy. He answered a few questions via e-mail about the strip.

So, was I onto something with my whole theory that Garfield Minus Garfield is about identification with the “product” in a fractured late capitalist society, or was I full of crap?

Yeah I think you were on to something. It’s Jon’s inability to “fit in.” It’s about being a sad, bored, lonely nerd on a Saturday night. I can’t imagine why it became so successful on the internet 😉

Part of G-G’s appeal is its “bootleg” nature, but interestingly, most mashups are about addition rather than subtraction. Do you identify with “remix culture” or art pranksters like Banksy, or is this just a laugh?

I would say I do identify with the remix culture. I think all artists bootleg to a point (not that I’m claiming to be an artist!). But everything is derivative: music, art, literature. Anyone who says they’re influenced by no-one is lying.

A commenter on my original post compared G-G to removing everyone but Kramer from an episode of Seinfeld, an idea which I thought was spectacular. Do you have any other ideas for subtraction art we should watch out for?

I’ve been wracking my brains for another subtraction premise since G-G took off and I’ve found nothing I’ve been happy with. There’s a particular dynamic between Jon and Garfield that lends itself to the “minus” approach perfectly. Having said that I’d love to see that Seinfeld premise in action.

Why the heck was my post about you so popular?

G-G was insanely popular for a while. I mean crazy popular. My stats company dropped the site because it was screwing up their server and they couldn’t keep up with the traffic. Since then it’s calmed down. But I guess your review appeared on the radar at just the right time.

—
Check out the Garfield Minus Garfield archive here. Walsh also dropped a hint about a “development” of some sort regarding the strip to be announced soon, so stay tuned! What could it be? Will the Garfield balloon in the Macy’s Parade be replaced by, er, the absence of a balloon?