Last December, Congress got around to finishing the federal budget. In addition to the usual raft of earmarks, tucked into the final 1,400-plus-page spending bill were scores of blind items that specify where its $555 billion can’t go. The reverse earmarks ranged from the aggressively anti-pork (targeting the cdc‘s rec room) to the symbolic (cutting funding for torture) to the downright weird (attempting to block anyone from claiming Montana’s unofficial state motto, inserted by Big Sky Senator Max Baucus). Here are some of the things your tax dollars aren’t supposed to pay for in 2008:

Currency Conversion: “None of the funds appropriated in this Act…may be used to redesign the $1 Federal Reserve note.”

Motto Theft: “…to register, issue, transfer, or enforce any trademark of the phrase ‘Last Best Place.'”

epa Pseudoscience: “…to disseminate scientific information that is deliberately false or misleading.”

People Patents: “…to issue patents on claims directed to or encompassing a human organism.”

Taking the Gloves Off: “…to support or justify the use of torture by any official or contract employee of the United States Government.”

Idle Interns: “…to eliminate guided tours of the United States Capitol which are led by employees and interns of offices of Members of Congress and other offices of the House of Representatives and Senate.”

Giant Junkets: “…to send or otherwise pay for the attendance of more than 50 employees from a Federal department or agency at any single conference occurring outside the United States.”

High Times: “…any activity that promotes the legalization of any drug or other substance included in schedule I of the schedules of controlled substances.”

Chinese Chicken: “…allowing poultry products to be imported into the United States from the People’s Republic of China.”

The Next Armstrong Williams: “…to produce any prepackaged news story intended for broadcast or distribution in the United States [unless there’s a disclaimer].”

An Outbreak of Relaxation: “…to provide additional rotating pastel lights, zero-gravity chairs, or dry-heat saunas for [the Centers for Disease Control] fitness center.” 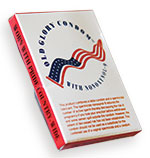 And in case you were wondering where the money must go, the budget requires all federal condom funds to be used “only for the procurement of condoms manufactured in the United States.”